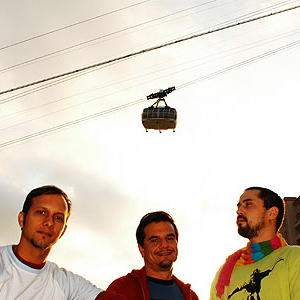 Brazilian music is like a diamond ? complex, brilliant, and multifaceted. And there's no surprise there; Brazilian culture is so wildly diverse, so open to foreign influences and so famously devoted to letting the good times roll that there's no way Brazil's music could be anything but a kaleidoscopic riot of flavors and colors. That's how you end up with such popular and influential exports as samba, lambada and bossa nova, musical styles that are constantly mutating and developing, absorbing new elements from around the world along the way.

That brings us to Bossacucanova, the Rio-based trio whose new album is a perfect illustration of the way Brazilian musicians will happily grab and incorporate influences from around the world ? and of the way they can turn those elements into music that is both freshly modern and deeply, traditionally Brazilian ? not to mention arm-wavingly, butt-swingingly, irresistibly danceable.

DJ Marcelinho DaLua, bassist M?rcio Menescal and keyboardist Alexandre Moreira burst onto the international dance music scene in 1999 with Revisited Classics, a collection of both new and old bossa nova songs given new life and vigor through the application of funky breakbeats, skillful turntablism, electronic manipulation and adventurous mixology. The idea of fusing the smooth sounds of classic bossa nova recordings with up-to-the-minute electronic elements wasn't exactly brand new ? No Wave legend Arto Lindsay had been combining Brazilian music with modern influences for years, and European DJs had already figured out that bossa nova's laid-back, free-flowing rhythm could add a crowd-pleasing spice to their own material. But Bossacucanova's approach to Euro-Brazilian fusion was unusually respectful of their home country's traditions, putting the bossa first and the electronica second, and the international music press took notice quickly.

The trio's sophomore effort was, if anything, even better. Brasilidade found them working with the legendary guitarist Roberto Menescal, composer of several classic bossas and a hugely influential producer and A&R man during the 1970s. (He's also M?rcio's father.) On Brasilidade the band took a more organic approach to modern bossa nova, spending less time coming up with electronic adaptations of classic material and focusing more on writing new songs that could be played in a live setting. You could hear more of the band's debt to the traditional verities of Brazilian dance music, but there was still no question that they were coming up with new and better ways to get people up and out of their chairs.

Now comes Uma Batida Diferente ("A Different Beat"), Bossacucanova's third album for Ziriguiboom/Six Degrees Records and their most satisfying and fully-integrated effort yet. Five years after the group's debut, the practice of combining the smooth sounds of classic bossa nova with modern electronic beats is more popular than ever. But Bossacucanova's sound remains unique, partly because the trio's approach continues to treat bossa nova as the main dish and the breakbeats, electronica and other embellishments as garnishes, rather than the other way around.

Uma Batida Diferente was recorded in the band's home base of Ipanema, Rio de Janeiro in early 2004. The band continued its well-established pattern by inviting legendary figures of Brazilian music both old and new to participate in the project: Roberto Menescal, who has essentially become a fourth member of the band, is back again, lending his delicious, jazz-inflected guitar lines and laid-back scat singing to the mix on party-ready gems like "Bom da Rio (Posto 6)" and the classic Baden Powell/Lula Freire composition "Feitinha Pro Poeta." Singer Marcos Valle, a living legend in Brazil who is, unfortunately, not as well known outside the country as he should be, lends his voice to the beautifully swinging "Queria." Fellow beat-freak experimentalists and Ziriguiboom mainstays Zuco 103 pitch in on a charmingly quirky number titled "Samba da Minha Terra."

But the album's most affecting moments come on the tracks that feature Brazilian-American singer Cris Delanno, whose sweet and slightly husky voice lends a special wistfulness to "Onde Anda Meu Amor," an otherwise jittery and energetic bit of Euro-Brazilian dance fusion. As she and Orlan Divo trade lines on the verses, the band cooks up a light but complex groove that creates a perfect counterpoint to the duo's poignant singing. On a spare and gorgeous version of Antonio Carlos Jobim's "Aguas de Mar?o," Delanno sings (in sweetly accented English) over a gentle accompaniment dominated by acoustic guitar and electric piano, and the song's soft melancholy is enough to bring a tear to your eye even as it makes you sway your hips. It's moments like these that make clear what a special combination of talents exists in Bossacucanova. Whether they're adding subtle and graceful turntablist flourishes to "Samba da Minha Terra" or beefing up the Tom Jobim composition "Bonita" with chugging house rhythms, their simultaneous dedication to the music's past and to its future is unmistakable. And so is the involuntary twitching you'll feel in your seat from the first moment of just about every cut; this is a joyful celebration, not some kind of po-faced, eat-your-peas academic ethnomusicology.

In a message to purchasers of Uma Batida Diferente, the members of Bossacucanova suggest that you "secure a tranquil moment, select the right company and relax your mind and your eyes. Let our soundwaves take you to the magnificent sunsets of Ipanema beach." As attractive as that invitation is, listeners will probably find that this wonderful album will complement a raucous evening on the patio with cocktails and tiki torches as nicely as it does a moment of tranquil relaxation. Gentle jazz, complex breakbeats, sad-but-happy melodies, sudden eruptions of funky electronica ? it sounds kind of like a recipe for the perfect party, doesn't it? For that matter, it may even be the recipe for a better world ? but the party will do for now.

Our Kind Of Bossa