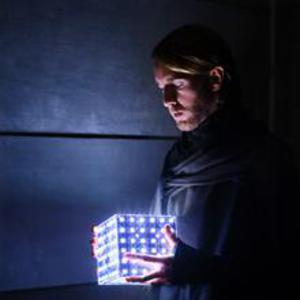 Richard (Richie) Hawtin (born June 4, 1970, Banbury, Oxfordshire, England) is an English-Canadian electronic musician and internationally-touring DJ who was an influential part of Detroit techno's second wave of artists in the early 1990s. Hawtin is best known for his haunting, minimal works under the alias Plastikman, a moniker he continued to use into the mid 2000s. Hawtin is also known for DJing intelligent, minimal techno sets making use of high-tech electronics such as drum machines and digital mixing equipment.

Hawtin is also known for DJing intelligent, minimal techno sets making use of high-tech electronics such as drum machines and digital mixing equipment. With fellow second-waver John Acquaviva he founded and still runs the Plus 8 record label in May 1990, and in 1998 he launched Minus, primarily for his own projects.

Hawtin has recorded music under the aliases Plastikman, F.U.S.E, Concept 1, Circuit Breaker, The Hard Brothers, Hard Trax, Jack Master, and UP!. He also recorded and performed, in combination with other artists, under group names such as 0733, Cybersonik, Final Exposure, Spawn (with Fred Giannelli and Daniel Bell), and States Of Mind. Additionally, Richie and Pete Namlook collaborated to produce the From Within series of albums blending minimal techno and ambient sounds. He has also released an album Sounds of the Third Season with Sven V?th.

Although he was born in Banbury, Oxfordshire in England, Hawtin has spent most of his life in LaSalle, Ontario, a suburb of Windsor, Ontario. Hawtin attended Sandwich Secondary High School in LaSalle. He spent part of 2002 and 2003 living in New York City, and has since moved to Berlin, Germany. He has one brother, Matthew, who is a visual artist and ambient music DJ. Circa 1993, Hawtin was billed for DJ appearances under the name Richie Rich, a name also used by an American hip hop music DJ who was a member of 3rd Bass, and also a UK house music DJ who was actively producing remixes around the same time. Hawtin collaborated with choreographer Enzo Cosimi to create a composition called "9.20" for the 2006 Winter Olympics opening ceremony.

In 2007, Slices DVD magazine launched a series of biographies called "Pioneers of Electronic Music", with the first issue being a roughly 60 minute documentary dedicated to the life of Richie Hawtin. The film follows his career from his early days crossing the border to Detroit to his current life in Berlin, interviewing many colleagues and family members.

From My Mind To Yours CD2

From My Mind To Yours CD1

Live at the Remix Hotel (WMC)-