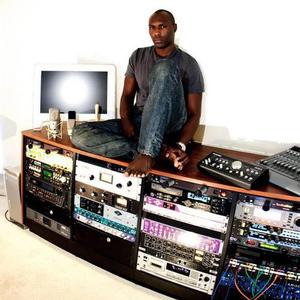 Profile: With the deluge of techno artists from all over the world making headlines, it's easy (although very wrong) to forget that techno was created in Detroit, Michigan by African-American visionaries like Kevin Saunderson, Juan Atkins and Derrick May. From there Kenny Larkin began his music career in 1990 after serving two years in the U.S. Air Force, where he was repairing computers. Hanging out at local Detroit clubs like The Music Institute and The Shelter, he soon hooked up with Richie Hawtin and John Acquaviva records under a variety of monikers, including Dark Comedy, Pod and Yennek.

His first full-length album Azimuth, released in 1994, established Kenny as one of the major forces in contemporary dance music. 1995's follow-up, Metaphor, once again proved convincingly that, unlike anybody else, Larkin kicks up some real soul. All in all, Metaphor is a high class Detroit package marked by variety and rhythmic enchantment; it's melodic, emotive and, like so much great U.S. techno, almost jazz-like in places. "This is electronic soul music, full of human feeling and warmth." At times very minimal and ambient, other times well informed by house, Kenny's warm dance beats hit in just the right places at just the right time. "A lot of styles of music come out in my moods: jazz, house, techno... it depends on how I'm feeling" -- Ken, January 1996