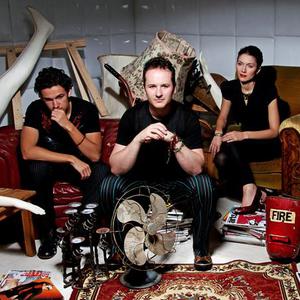 (1) Q are a three piece rock band from London. Formed in 2005 by as an acoustic act, they gigged on the London circuit building up a steady following. With the arrival of drummer Samuel Hall Q went from being a small veue acoustic act to full Rock band overnight.
The sound that the band created was both melodic and epic.

They set about working on their debut EP "Angel" which was released in February 2007 and was well received by fans and critics alike.

After gigging throughout 2007 and 2008, they settled back into the studio to record and release their second EP "Staring At The Sun".

Q then signed to Cloudburst records and have started working on their Debut album.
2010 will see them release their debut album which is untitled as yet.

(2) "Q" is based out of the Springfield Massachusetts. The band was founded in the year 2000.

Their style is heavy but melodic. Programmed sequences are used to give the music a more full sound. Nothing is written without the ability to recreate it live. The main focus of Q is the writing and the live performance. Each member has a wide variety of influences industrial, heavy metal, techno, and more which contribute to the music of "Q".

The band has accomplished quite a bit since their inception. They have been featured on numerous compilation CDs throughout the country as well as being prominently featured on a DAVID BOWIE tribute record. The band has also written and recorded the theme music for the original music showcase "Evolving Artist". "Q" has shared the stage with other such JAGER MUSIC acts as Slayer, Mushroomhead, Dope, Killswitch Engage, God Forbid, and Shadows Fall.

(3) Q was a small synthpop band formed in 1982 by Jon St. James and Stacey Swain. Ross Wood was also a group member, and Jon Van Tongeren was involved as well. The group only had two releases: a 7" single of their song "Playback" on Cocteau Records, and a four-track EP released almost exclusively to college radio stations that has become known among fans as The Q EP. Only 1,000 copies were printed of the EP, and it's considered highly collectible.

Swain and St. James (along with Van Tongeren) formed SSQ shortly after the release of Q's EP, and they went on to release one album, Playback, as well as a couple of singles over the next two years.

The same lineup of musicians, with Swain and St. James still at the core, would eventually achieve commercial success under the name Stacey Q.

(4) Q was a four piece alternative rock band formed in 2001 in Bratislava, Slovakia. The band's last performance was in 2006 and there are no plans for the future so far.

(10) Q - A Techno Collaboration of Eddy De Clercq and Quazar (Gert Van Veen and Erik van Putten AKA Eric Cycle). They produced one song, "From Within", for R&S Records in 1990.

(11) Q - Finnish hard rock band formed in 2009 under the name of Valtakunta to play a cover gig at Puumala Rock -festival. After the festival band members wanted to continue playing together and started composing songs of their own. To give it a fresh start and to shake out of their roots, they soon changed their name to Q. They've just released their first demosingle: Kulkuri on Hitlantis http://www.hitlantis.com/q.
More info (in finnish) on their official facebook site http://www.facebook.com/q.official