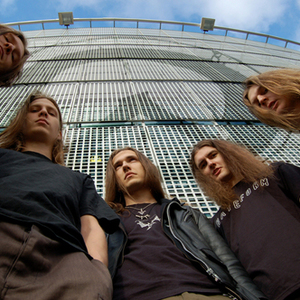 Amoral was established by Ben Varon, Juhana Karlsson and Silver Ots in 2000 in Helsinki, Finland. Their first vocalist was Matti Pitk?nen, who was quickly replaced by Niko Kallioj?rvi. Former band members also include Ville Sorvali from Moonsorrow on bass. For some time before Sorvali joined Amoral, the band was without bass player, and Ots played bass on some of their demos. Amoral released two demos, Desolation and Other Flesh, with varying line-ups, and played some minor gigs before releasing their first full-length album.

Amoral signed with Rage of Achilles Records and released their first album, Wound Creations, in 2004.

The band's production can be classified as technical, progressive and melodic metal, combined with rock elements. Amoral's sound is heavy riff driven yet still has a melodic power groove. Skillful ensemble and crisp performance has characterized Amoral, which is internationally recognized as one of Finland's foremost bands. The brave and independent development of their music can be heard throughout their four albums.

Soon after the 2005 European tour, Amoral returned to the studio to record their second album, Decrowning. The album was released in Finland and several other countries in October 2005 and in Japan and the United States in March 2006. Amoral's third album was first announced on their website in early July 2006. The album was recorded in Studio Sound Supreme in H?meenlinna in early 2007, and it was released in August 2007.

Amoral's fourth studio album was announced in November 2008 when the band announced Ari Koivunen as their new front man. The album was also the debut of bassist Pekka Johansson. The development culminated in 2009 on Show Your Colors, the 4th album, where the previous growling vocals were replaced with clean vocals and big choruses. Amoral?s music was earlier characterized by metal media as death metal due to the growling vocals, but now the classification varies from power metal to progressive rock. Show Your Colors received a lot of praise upon its release. The album's first single, "Year of the Suckerpunch" was on the Finnish national radio Ylex?s playlist, with the highest hopes of receiving song of the year for 2009. The album was ranked by public voting as the fifth best domestic metal album at the Finnish Metal Awards 2009. Show Your Colors has also been released in Great Britain, Germany, USA, Canada and Japan.

At the end of 2010 Amoral announced it?s new guitarist Masi Hukari, who shared the lead guitar with Ben Varon as well as co-wrote two of the songs. 2011. the band recorded Beneath at Sound Supreme studios in H?meenlinna and the CD was released 26 October. The Japan edition was out 19 October. The album was produced by Janne Saksa and guitarist Ben Varon. Beneath continued on the path Amoral started with ?Show Your Colors?. The emphasis is still on solid songwriting, big hooks, new arrangements and guitar riffs, but the scale is wider than before: From 9-minute epics ?Beneath? to straightforward rock songs ?Silhouette? and ?Same Difference?, to nods to the band's death metal past ?(Won't Go) Home? and ?Staying Human? and talks between acoustic guitars and industrial landscapes in ?Wastelands?. The album was ranked by public voting as the fourth best domestic metal album at the Finnish Metal Awards 2011.