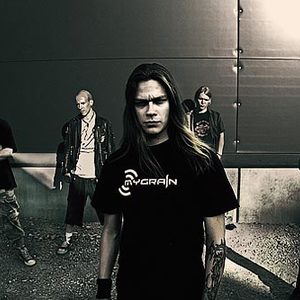 1999 guitarist/songwriter Janne Tolonen, drummer/songwriter L?n? Varjola, bassist Jukka Keisala and guitarist B?nde P?ll?nen found PROFANE OMEN. Soon after foundation of the group the singer Jules N?veri joined to band. The band started out by playing melodic heavy metal and in the beginning year 2000 they hit the studio to make their first demo which goes by the name of ?Profane Omen?. The band played their first gig.

In the end of year 2000 the band made their second demo called ?Bittersweet Omen? which is also categorized under the genre of melodic heavy metal. Soon after the second demo guitarist P?ll?nen decided to call it quits and leave the band. Guitarist/songwriter Williami Kurki joined to the band then.

In the beginning of year 2001 the band made their third demo called ?Fuck The Beast? in Sonic Pump Studios with Nino Laurenne (Antidote, Thunderstone) as the engineer. PROFANE OMEN started to begin sound a bit more aggressive and the style of music was developing into more of a riff-ruling metal. One of the songs, ?Through The Dark? ends up on a Finnish metal compilation called ?Northern Breeze 2?.

In summer 2001 the band went to the Sonic Pump Studios again to make their fourth demo called ?Load Of Lead?. Again, the engineering was handled by Nino Laurenne. The material in that demo is a lot more aggressive than in the earlier demos. ?LOL? got quite good reviews in Finnish magazines and webzines. PROFANE OMEN played more gigs and kicked more asses.

In the end of year 2001 guitarist Tolonen and drummer Varjola decided to leave the band. Tolonen founds Misery Inc.. PROFANE OMEN was soon joined by drummer Mika Tanttu and guitarist Antti Kokkonen. The band start to practice their material for the next demo/EP. The group found themselves again at Sonic Pump Studios with Nino Laurenne.

In summer 2002 PROFANE OMEN released their first official release. The EP ?Label Of Black? gets nominated as ?The release of the month? in German Resistance Radio. ?LOB? got good reviews from many Finnish magazines and webzines. PROFANE OMEN is known as an active live band by playing many gigs in small Finnish underground metal events. Finnish national TV network YLE used material off ?LOB? in a document of theirs.

In spring 2003 the band hit the studio again to make the sixth demo called ?c2h4o?. This time the engineering and production is handled by Aleksanteri Kuosa and Tomppa Saarenketo at Oriville Studios. PROFANE OMEN continue their way on a path of aggressive, yet melodic heavy metal. Again the demo gets good reviews and the band is seen on stage more often.

In summer 2003 bassist Keisala decides to leave the band. PROFANE OMEN is soon joined by bassist Tomppa Saarenketo who was already partially responsible of how the latest demo ?c2h4o? sounded like.

In fall 2003 PROFANE OMEN and Austrian death metallers Spearhead organize a mini tour which contains three gigs in Finland and four gigs in Austria. The band play their first gig outside Finland.

In spring 2004 PROFANE OMEN is again at Sonic Pump Studios making a single of a song ?Adrenaline?. The band is helped by producer Panu Willman (ex-Entwine, ex-Before The Dawn, Dark Filth Fraternity). The single is released in summer 2004. ?Adrenaline? is sold out.

In spring 2005 the band organize a gig trade with German band Medusa's Child and head off to Germany for three gigs. Immediately after the mini tour drummer Tanttu leaves the band and focuses fully on Kill The Romance. Soon after Tanttu's departure PROFANE OMEN is joined by drummer Samuli Mikkonen.

At this point PROFANE OMEN have had five former band members. The number of recordings is seven and the number of gigs huge.

In January 2006 the band hit Villvox Studios with producer Ville Sorvali (Moonsorrow) to record their debut album ?Beaten Into Submission?. The session is engineered by Aleksanteri Kuosa.

6th of September 2006 ?Beaten Into Submission? is released. ?BIS? enters the Finnish charts placing on a position 28. ?BIS? is critically acclaimed in several magazines and webzines.

In May 2007 PROFANE OMEN record their next release. EP ?Disconnected? is produced by Ville Sorvali and engineered by Aleksanteri Kuosa at Villvox Studios.