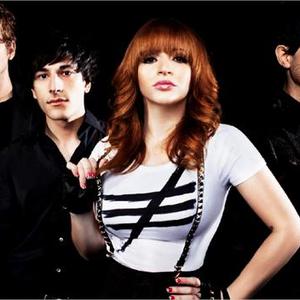 Morningwood is a power pop/rock band from New York City, founded in 2001 and signed to Capitol Records. The band currently consists of Chantal Claret (vocals), Peter "Pedro" Yanowitz (bass), Will Tendy (guitar) and Jonathan Schmidt (drums). This is the third incarnation of the band - Guitarist Richard Steel, drummer Japa Keenon (both who played on the first record), Sam Koppleman (drums) and Jen Turner (guitar) (who appeared in videos and toured after the first record) have left the group.

Their debut album, Morningwood, was produced by Gil Norton, known for his work with Pixies, the Foo Fighters, and Echo and the Bunnymen. Singles from the album include "Nth Degree", "Jetsetter" and "New York Girls". They toured with Mindless Self Indulgence, Head Automatica, Gang of Four, Kasabian, and The Sounds on various legs of their US gigs in 2006.

Morningwood's "Nth Degree" has been used in several Mercury vehicle commercials, featuring actress Jill Wagner. Their song "N? Rock" was used in the video games Burnout Revenge, SSX On Tour', "Thrillville"'. A demo version of a Morningwood song called Warrior was used in a Payless shoes TV spot. Morningwood received national exposure in the United States as a finalist in December 2005 Yahoo.com's Who's Next. They appeared twice on Late Show with David Letterman, twice on Last Call with Carson Daly, once on The Tonight Show, once on Jimmy Kimmel Live!, and twice on CD USA. They played live at the MTV Studios at midnight for the Human Giant 24 hour marathon.

Morningwood's lead singer is famous for commanding audience members to take off their clothes--typically when the song "Take Off Your Clothes" is performed. A brave male or female spectator will often climb atop the stage and strip. However, actual nudity seldom occurs--the participants usually just strip to their underwear.

The band's second album "Diamonds and Studs" was released in October of 2009. It featured the single "Sugar Baby" and "Best of Me", the latter of which was featured as the theme song for VH1's Daisy of Love and has been heard on promos for the latest season of Project Runway. The new album also marked a departure for Sam Koppleman (drums) and Jen Turner (guitar), leaving the band with the two original members - Chantal and Pedro.

In January of 2008, Chantal Claret was married to Jimmy Urine, the lead singer of Mindless Self Indulgence. The two met while their bands were touring together.

Not to be confused with the Italian hardcore band Morning Wood (with a space in the name).