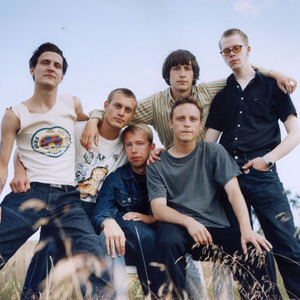 1) Monster a ska-soul-punk band from Sweden that split up in 2000. They released two albums: "Rockers Delight" (1997), "Gone Gone Gone/A Bash Dem" (1999) and some EPs. Their singer Anders Wendin now has a soloproject called Moneybrother, other band members are now with The Concretes

2) The Heavy/Hard/Thrash Metal band "MonsteR" from Brazil, They have 3 albuns already released ("The Nightmare Continues...","No One Can Stop Us!!" & "Harder, Thtcker & Longer") The band has only 3 members: Paul X (Bass and Vocal), Stone (Guitar) and E.V. Sword (Drum). Their website is http://www.monstermetal.com/

Their music has been described as ?quivering and ethereal, transmissions from a stormy, broken land."

Originally formed in 2001 by singer-guitarist Alexandra Johnstone, Monster quickly evolved from a solo project into a full band. Johnstone's songs however, remained the focus of the group, as they played extensively throughout the Los Angeles area. The band recorded their early folk-by way of the Velvet Underground songs at home, and released them on CDRs themselves. 2003 saw the band embark on a tour of North America, and the release of their third self-released CD EP.

In 2005, Johnstone entered the studio with drummer Paul Forney to record Monster's Self-Titled full length for local label The New Black. The album drew comparisons to Devendra Banhart, Mojave 3 and Galaxie 500. Certain songs, such as "We Shot It"--hauntingly calm and composed of no more than a banjo, bass, and Johnstone's striking vocals--seem inspired by American folk music while others such as "Alice Dupont" and "Golden Cloaked" are straight rock. The album has since sold out in the U.S., however the music eventually found its way to Europe, where it caught the attention of French label Le Jardin Colectif. The label repressed the album and the band toured France in April 2009 to promote the re-release.

After numerous line-up changes, Monster settled on it's current line-up in 2008. Johnstone is now joined by multi-instrumentalist Jack Long, drummer Vanessa Vivian Martinez, and bassist Carl Harders. In December of 2008, Monster recorded their second full-length album ?The Hoss, The Candle? at Red Rockets Glare Studio in Santa Monica, CA. The album features 10 more of Alexandra Johnstone's delicate and haunting songs. Tracks like ?I Was The Famous Horseman? and ?Following So Long? put Johnstone's voice front and center as usual, and yet the songs seem to have gotten even darker and more celestial. While still maintaining the Dylan folk influence that is at the heart of their sound, the new album takes off in unexpected directions, such as the track ?Old French Clothes? which culminates in a chorus that seems to evoke a Classical music take on the German band Can. ?The Hoss, The Candle? is due for release in Fall 2009.

4) The HC band M?nster from Germany.

5) There is another band called Monster from British Columbia, Canada. Their song "Dirty Town" has been played on CBC radio one. They might be hippies.

Last of a Dying Breed

Through The Eyes Of The World