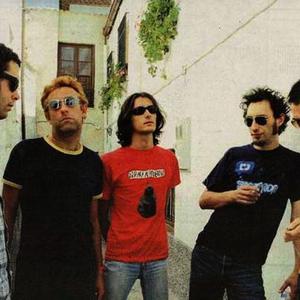 Los Planetas is a Spanish pop/rock band from the Southern city of Granada, formed in the early-1990s and active through the 2000s, and led by J ('jota': guitar, vocals) and Florent (guitar, moog & synthesizers). Current line-up includes drummer Erik (formerly of Lagartija Nick), guitar and keyboard player Banin (formerly in Ciao Firenze) and bassist Miguel L?pez. With a strong interest on psychedelic pop, indie-rock and hypnotic sounds by english-speaking bands like early Mercury Rev or Joy Division, Los Planetas are one of the most acclaimed and durable bands in spanish indie pop.

They debuted in 1993 with the EP 'Medusa,' which featured the critically acclaimed track 'Mi hermana peque?a.' In it, Los Planetas displayed what would become their trademark sound: noise-pop with energetic melodies sung in J's detached, nasal monotone, drowned by powerful guitars. The group began touring extensively and enjoyed minor hits in Spain with "?Qu? puedo hacer?" (What can I do?), a single from their first full-length album "S?per 8" (1994), and 'Nuevas sensaciones' (1995). Their second album "Pop" (1996) was a failed attempt at mainstream commercial success, but helped cement their status at the forefront of the then-burgeoining Spanish indie scene. For their third album, Los Planetas returned to a more personal sound: "Una semana en el motor de un autob?s" (A week in the engine of a bus, 1998) was their most assertive, aggressive and introspective album to date, and also earned them the best reviews of their career. Already established as one of the flagship artists to come out of the 1990's alternative movement in Spain, they released the EP "?Dios Existe! El rollo mesianico de Los Planetas" (1999) and a notable collection of singles and B-sides, "Canciones para una orquesta qu?mica" (Songs for a chemical orchestra, 1999).

Fourth album "Unidad de desplazamiento" (Unit of movement, 2000) employed the same formula with similar but more uneven results, and contained one of Los Planetas' best received and most memorable songs, "Un buen d?a." Their next two albums, "Encuentros con entidades" (Encounters with entities, 2002) and "Los Planetas contra la ley la gravedad" (Los Planetas against the law of gravity, 2004), were generally less well-received than their predecessors, but would still be commonly found at or near the top of most critics' end-of-year lists. Their latest album, "La leyenda del espacio" (Space legend), is a highly ambitious attempt to integrate flamenco themes and structures into their trademark alternative rock sound, and was released in April 2007 to mostly favorable reviews.

UPDATE: Since summer 2009, bassist Miguel L?pez was replaced by Israel Medina, from Half Foot Outside.