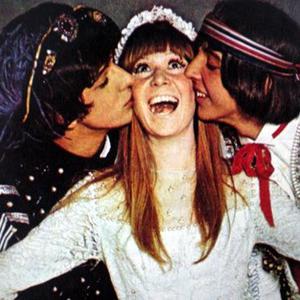 Os Mutantes were formed in S?o Paulo, Brazil, in 1966 by brothers Arnaldo Baptista and S&eacute;rgio Dias and lead singer Rita Lee. Active during the Tropicalia movement of the late 1960s, they took Brazilian music and fused it with British rock and American psychedelia to create a distinctive, vibrant sound. Along with Gilberto Gil, Caetano Veloso and Tom Z&eacute;, they helped define the Tropic?lia movement.

While still in high school, Rita Lee teamed with brothers Arnaldo Baptista and S&eacute;rgio Dias Baptista to form the band. A trio of brash musical experimentalists, the group fiddled with self-made instruments, distortion, feedback, musique concr?te, and studio tricks of all kinds to create a lighthearted, playful version of extreme Brazilian music. This was their best creative moment.

While Gil and Veloso were first imprisoned and then exiled to England during the military dictatorship in Brazil (1969-1972) the Mutantes left the Tropic?lia movement, adding a more psychedelic flavour to their sound.

The 70s seemed to be a time of great upheaval for the band, both creatively and personally. They left behind their "tropicalist" roots and made their first lysergic trip which resulted in the album "Jardim El?trico" (Eletric Garden) and "O Primeiro Dia do Resto da Sua Vida (rare album - title translates as "The First Day of the Rest of Your Life"). With influences of the progressive band Yes the trio (with Liminha at the bass and Dinho at the drums) made their last album together "Os Mutantes e Seus Cometas no Pa?s dos Bauretz".

Rita Lee left the band for reasons that remain unclear; Lee says they kicked her out, while Arnaldo blames her, claiming she sent him to mental institutions for his excessive LSD usage. In an attempt to escape from one psychiatric institution he jumped from the 5th floor, after which he was in a coma for 6 weeks, only very slowly recovering from his fall. After the Rita left in 1972 they developed two fantastic psychedelic-progressive-hippie-rock albums which were "O 'A' e o 'Z'" and "Tudo Foi Feito Pelo Sol" (without Arnaldo), which went on to be their best selling album.

With the beginning of the 80s the Mutantes were almost forgotten or considered to be the old hippie-band of the now famous former Mutantes singer Rita Lee. In the 90s Beck and Kurt Cobain of Nirvana began to spread the word about them.

Finally, thanks to promotion and namechecking by David Byrne through his record label Luaka Bop, Os Mutantes has gained a greater global audience within the past decade. With Luaka Bop they released the album Everything is Possible! which is a compilation of their greatest hits (as curated by David Byrne). On 22nd of May 2006 they played their first concert since 1975 with the Baptista brothers reunited on stage. Apparently Devendra Banhart asked them to be their roadie for the show which led them to invite him as a support act.