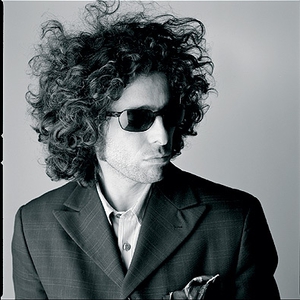 Andres Calamaro is one of the most popular Argentinian pop-rock songwriters. A songs craftsman, as he likes to consider himself. Born Aug 22, 1961 in Buenos Aires, Argentina, he began his professional musical career at the age of 17 playing keyboards in Ra?ces. In 1981 he incorporated to one of the main bands of the Argentinean '80s rock scene: Los Abuelos de la Nada. Although the band was led by the brilliant Miguel Abuelo, Calamaro composed most of the band's hits, like "Mil Horas," "As? es el calor," "Sin gamul?n" and "Costumbres Argentinas."

Born Aug 22, 1961 in Buenos Aires, Argentina, he began his professional musical career at the age of 17 playing keyboards in Ra?ces.
In 1981 he incorporated to one of the main bands of the Argentinean '80s rock scene: Los Abuelos de la Nada. Although the band was led by the brilliant Miguel Abuelo, Calamaro composed most of the band's hits, like "Mil Horas," "As? es el calor," "Sin gamul?n" and "Costumbres Argentinas."

In 1984 he made his solo debut with Hotel Calamaro. The album was a bizarre mix of styles and musicians, and didn't gain public or press support.

In 1985 he left Los Abuelos de la Nada and registered his second album Vida Cruel. Inspite of the important musicians and guests, such as Luis Alberto Spinetta and Charly Garc&iacute;a, the album was a disappointment: both commercially and artistically. But if as a songwriter the luck was out of reach, he had an intense and successful work as a producer of bands like Los Enanitos Verdes, Los Fabulosos Cadillacs and Don Cornelio Y La Zona. He also worked and collaborated with many artists of different styles and genres, a constant attitude through his whole career. The third album Por Mirarte showed Calamaro in a better shape with an established band. Released in 1988 it contains some outstanding songs such as "Con los dientes apretados" and "Me olvid? de los dem?s," while others like "Cartas sin Marcar" and "Loco por t?" helped the album to get popular.

When Calamaro released in 1989 Nadie Sale Vivo de Aqu?, Argentina was living it's worst economical crisis: few albums were released. The album title suggest it all: Nobody comes out alive from here. The LP production was paralyzed, and the few that could make it were almost ignored. That was Calamaro's case. This situation lead the singer to settle in Spain, following a road taken by many Argentinean rockers. Out there in Spain he met Ariel Rot y Javier Infante, former members of Tequila. They formed Los Rodr&iacute;guez in 1991, a pop-rock band that was very popular in Spain and Latin America: Calamaro's songs began to be popular like in the early '80s: the hit maker was on the road again. Curiously, from Spain, he was conquering Argentina. While being part of the band he didn't release any new solo material, just Grabaciones Encontradas 1 y 2, a couple of CDs that contained unreleased and rare material from the '80s.

After the split of Los Rodr&iacute;guez, Calamaro returned to his solo career recording Alta Suciedad in 1997, an album produced by Joe Blaney. This album brought him the commercial success that seemed to fail in his previous solo efforts, and sold 300.000 copies just in Argentina. That is certainly a huge amount for the country's small market. No doubts, that album helped him to be placed between the star legends of the national rock scene. Before that album Calamaro was considered an important character, appreciated by other musicians, but not a main one. After he broke up with his spanish girlfriend he released in 1999 the double CD Honestidad Brutal. Recorded when he was 37, it contained 37 songs of despair, love loss, drugs and regret. It was not as successful at the previous album, but showed a new Calamaro: desperate, decadent and often elegant at the same time, with a new and raw lyrical approach. El Salmon followed in spring 2001.
Calamaro's next proyect, El Cantante, was released in 2005. A delicious mixture of tango, rock n'roll and flamenco guitars (mostly played by spanish prodigy El Ni&ntilde;o Josele).
After a break, he returned to the stages with a tour full of classics that gave birth to a live album called El Regreso on 2005, recorded with members of Bersuit Vergarabat as a backing band. This album was very well received for the charts as well as for the critics, wich lead him to different awards. One year later, on 2006, Andres published a new album from the roots of tango with the collaboration of guitarrists Ni&ntilde;o Josele and Juanjo Dominguez. On 2007 El palacio de las flores was published, although it was recorded on 2006. The album had the collaboration and musical influence of argentine composer Lito nebbia and was also recorded on his studio. This was the return to a classic Calamaro album with new songs and hits.