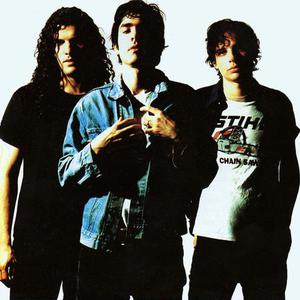 If you would like to share Jon Spencer Blues Explosion lyrics with other users of this site, please see the bottom of this page on how to submit Jon Spencer Blues Explosion lyrics. Members include Judah Bauer (born in WI), guitar; Russell Simins, drums; Jon Spencer (born c. 1965, in NH; son of a university professor and a cardiology technician; attended Brown University, mid-1980s; married Christina Martinez), vocals and guitar.

Combining the dejected airs of the blues with punk's sneering energy, the Jon Spencer Blues Explosion makes records that are often ignored by commercial radio but adored by critics and a hardcore legion of fans alike. Spencer leads his band, together since the early 1990s, into new and innovative musical territories that run the gamut from collaboration with an old-style Mississippi blues artist to incorporating a Theremin. As Melody Maker's John Robb explained, "Spencer is a sharp blade who knows that the feel of rock 'n' roll was far better in the deadly Fifties than in the overrated Sixties."

Spencer grew up in New Hampshire and went to Brown University, but dropped out his sophomore year after meeting guitarist Julia Cafritz. He had originally wanted to pursue filmmaking, but, "then I realized it would be easier to be onstage and playing music than going through the long, drawn-out hassle of making a movie," he recalled in a Rolling Stone interview with Christina Kelly. In 1985 he joined New York City-based Pussy Galore with Cafritz; another member was Christina Martinez, who eventually married Spencer. Within a year the band had developed a cult following, though record sales always remained low. "At their '86-'87 peak, Pussy Galore were the finest American punk band going, the jagged side of early Fall/Neubauten filtered through a uniquely U.S. hardcore postgrad sensibility," wrote Gerard Cosloy in the Village Voice.

Pussy Galore disbanded in 1990, a year after Martinez and Spencer had formed Boss Hog. Spencer busied himself with the new band and another New York City-based outfit called the Honeymoon Killers, and eventually made the acquaintance of drummer Russell Simins. The two began playing together and were later joined by Simins's roommate, guitarist Judah Bauer. The trio officially formed the Jon Spencer Blues Explosion in 1991 and recorded their first effort under this name, Crypt Style, in just five hours, and released it on Crypt Records in 1992. In this band, without a bassist, either Spencer or Bauer will play a rhythm line on their guitar; Spencer is partial to a cheap Japanese-made guitar that his wife bought for fewer than twenty dollars. Eventually the Blues Explosion signed with Caroline and an eponymous debut on the label was released that same year. Joe Levy reviewed it for Rolling Stone, and found that, "at his best, Spencer cross-wires the menacing emptiness of early country blues with the compulsive overload of Nineties noise." More succinctly, Melody Maker's Cathi Unsworth called it a record "reeking of blood, sex and vicious jazz."

By 1993 the Blues Explosion had switched to the Matador label, and their second effort, Extra Width, was released that year. Again, they finished in near-record time. On it, wrote Melody Maker's Dave Simpson, they "manage to sound possessed, as if there's actually something in them, throwing this stuff out." Spencer later said that though he was initially happy with the finished product, when he heard the record played in clubs he discerned its flaws clearly. When it came time to record again--1994's Orange--he took a different approach, and he and Bauer and Simins rehearsed the songs live over a period of weeks. "It used to be that we would go into the studio every three or four months and just record basic tracks in an afternoon," Spencer said of the previous releases in an interview with Spin's Jac Zinder.

Orange--named in homage to a vivid backdrop behind soul singer James Brown in some 1960s footage they had seen--prompted Spencer to admit to Spin that, "we tried so hard to get the sound full and make a technically superior record to Extra Width that it nearly drove us crazy." The results were evident. Orange included experimentation with synthesizers and odd production tricks as well as a spoken-word bit that alternative-rapper Beck contributed by phone from Australia. Like other critics, Melody Maker's Robb enthused over Orange, calling it an "unholy, godlike surge of excitement." Rolling Stone's Jon Wiederhorn called it "an emotional clash of stormy blues, passionate soul and noisy garage rock punctuated at various points by the sounds of lush strings, distorted vocals, DJ scratching and galactic sound effects."

After touring in support of Orange, the Blues Explosion played some dates with Mississippi blues singer R.L. Burnside. They also appeared on his album, A Ass Pocket Full of Whiskey, and wrote "RL Got Soul" in homage to him for their next project, 1996's Now I Got Worry. Despite this--and its guest appearance by legendary rhythm 'n' blues singer Rufus Thomas--Rolling Stone's Kelly noted, "the album is largely devoid of the black cultural signifiers that have previously worked the nerves of some critics of the Blues Explosion." She termed Now I Got Worry "darker and even more raucous than...Orange," and Spencer confirmed that impression in their interview. "There is a lot more personal stuff on the album, just about living, trying to get along," he said.

After extensive touring and blistering hot live shows, the Blues Explosion had made a name for themselves with garage-rock fans as a band that took chances. Sound-a-like groups began to sprout, but no one could match the Blues Explosion's fever. For the group's next anticipated album, they chose to record the songs live at six different studios. With its handful of various producers, 1998's Acme resulted in mish-mash of sounds. Grit-soul rocker Andre Williams served as executive producer, yet the album highlighted the group's interest in hip-hop and electronic beats. Spencer's wife and their Boss Hog band mate Hollis Queens lent their feminine vocals along with help from members of Delta 72 and The Lonesome Organist. So much came from the many recording sessions that the band decided to release an entire second album full of genre-bending remixes and outtakes. Dubbed Xtra-Acme USA, the disc featured work by electronic musician Moby and remixes with Steve Albini.

Returning to the powerful rock 'n' roll riffs and heavy fuzz of their earlier work, the trio's next album, 2002's Plastic Fang, found the experienced band at their old game. Rolling Stone remarked, "...The band has ditched the noise and come back with a straightforward homage to classic rock and werewolves." The strength of the commanding "She Said" helped all the tunes swagger and strut with the band's trademarked funky sound. Veteran musicians Dr. John and Funkadelic keyboardist Bernie Worrell added some credibility to what turned out to be the band's last album with Matador Records. The album as a whole sounded more controlled, perhaps in an effort to capitalize on the garage-rock scene that had now infiltrated mainstream media.

2004 marked a fresh start for the band. Not only did they leave veteran indie label Matador for a new home on Sanctuary Records, they decided to change the band name as well. For their new record Damage, the group would now be known as simply Blues Explosion. "It's always been a band, never a solo project," Spencer said about dropping his moniker from the band name in an online interview with In Music We Trust. "The name change honors a band that allows the three of us to make music for a while. It may not be the best thing to do. Sometimes we shoot ourselves in the foot. The Blues Explosion is kind of a punk rock band. We do what we want." That ethos could be heard all over Damage. Public Enemy's Chuck D loaned his talent, as did DJ Shadow, among other eclectic contributors and producers. Critics were split on the album's sound. To some, what once seemed innovative seemed tired; to others it was a reinvigorated group.

Regardless of the guests or producers on each Blues Explosion album, Spencer always makes sure his albums are, over all, dance-worthy. "It's great if you can get some clever intellectual stuff happening," he told Guitar Player, "but if the song doesn't make you smile and shake your hips, all the clever stuff isn't worth a damn."

by Carol Brennan and Shannon McCarthy

Now I Got Worry