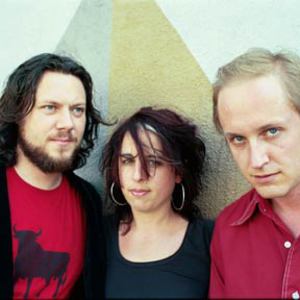 Reuben Glaser and Jesse Ebaugh began performing together around the turn of the century as an acoustic ragtime and delta blues duo, learning from the likes of Reverend Gary Davis, Fred Mcdowell and Blind Willie Johnson. They eventually added electricity, drums, and a name, Pearlene. The band's all-out, all-night style made instant waves in their native Cincinnati. As Glaser put it, ?The fact that people dance and get sweaty, sexy and crazy at our shows is the best payment. It's a kind of soul level communication that I don't know what I'd do without.

It's probably what kept this thing going while we figured out where we were going with it." Free your ass and your mind will follow.
The band got its ass on the road playing coast-to-coast US and UK gigs with some of this eras more explosive acts such as, Dead Meadow, The White Stripes, Detroit Cobras and Bellrays, as well as blues and punk survivors like T-Model Ford and Dead Moon. With the aid of several drummers and contributions from members of the Soledad Brothers, Glaser and Ebaugh went on to record two raucous stomp blues records, a self tilted album released by Sympathy for The Record Industry and Murder Blues and Prayer on the L.A. indie label Dimmak.
Pearlene went on to get several lengthy features in Fader magazine and Murder Blues was singled out by Denise Sullivan of Rolling Stone as one of her top 10 albums of the year. Though "twangy, bluesy, dirty-ass soul-rock boogie" clich?s may apply to some extent, there's always been something else at work here. As one critic said about their sophomore release "they have a live impromptu approach that would normally [just] give them a fun sound...but there's something ominous and creepy underlying their music." This turned out to be a keen insight, as what started as a blues fueled fist fight between a slide guitar and fuzz bass has, with the release of For Western Violence and Brief Sensuality, blossomed into a dark, lush, melodic landscape of sonic, southern soul psychedelia.
Recorded by John Curley (Afghan Whigs) at his Ultrasuede Studios in For Western Violence works through themes of love, loss, betrayal and spiritual redemption, and features a level of musical interplay rarely captured in the studio.
The album blasts off with newest member Andrew Higley hammering away on the rolling, barrelhouse hook of ?Hossanah!? Higley's contributions on piano, Hammond organ, Fender Rhodes, and bowed saw, set a deep tone throughout the record. Tunes such as ?All Fears (Have Faces)? could've come off of an iconic '70s Blues/Rock LP, with Glaser's ?Hendrixian vocals and jaw-dropping, sky-is-bleeding guitar work in full force.? Drummer Andrew Jody provides the rock n' roll backbone with the lean mean sound of a punk rock kid who found that soul music was his higher calling. Jesse Ebaugh's thunderous, melodic bass lines hold the whole dish together with a sound as strong and thick as black strap molasses. Glaser's lyrics wander through a dark landscape of modern apocalypse on the Crazy Horse-inspired, desolation blues of songs like "Watch the Way" and "High and Dangerous.? Acoustic numbers such as the album's lullaby "The Shot", and the band's take on Dead Moon's "I Hate the Blues", illustrate that a whisper often hits harder than a shout when it comes to heartache. While the swaggering anthem "We All Get Off" encourages us to lift our hearts and project our love into the world as medicine, as cure. Live Pearlene shows now include a woman's touch, with the addition of stellar backing vocalists Beth Harris (The Hiders), and Kristen Kreft. Kristen and Beth first worked with Pealrene in serving as the backing band for legendary Cincinnati funk and soul songwriter Kenny Smith in support of his acclaimed release, One More Day. With the ladies on board the result is a full rock'n'soul throwdown, complete with a Sunday morning chorus. When was the last time you heard something like that up-close and in-person, other than in your dreams?

For Western Violence and Brief Sesuality