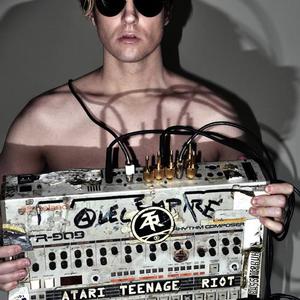 Alec Empire is undoubtedly a veteran, having released his first record while still at school. At the age of fourteen he formed his English-speaking band, Die Kinder (The Children), supporting bands like Die Toten Hosen. With Atari Teenage Riot he incited rebellion, while still finding time to battle as a DJ with Q-Bert and Mixmaster Mike, and make more remixes than most people have had hot dinners! Though maybe primarily known for his groundbreaking digital hardcore recordings...

Founder of Berlin's Digital Hardcore Recordings, Empire created some of the most musically diverse works of the 1990s. Empire was often identified with (and pigeonholed for) his ATR productions -- lo-fi breakbeats played at the speed of thrash that simultaneously embraced the energy of punk, the uncompromising ferocity of industrial music, and the futurism of techno.
On his solo albums, however, Empire ranged through isolationist ambient, electro, breakbeat, hard techno, even twisted lounge music. As such, he gained fans in several fields while recording for the German experimental/electronic label Mille Plateaux. Still, his first American exposure came when the Beastie Boys' Grand Royal Records signed Atari Teenage Riot in 1996.

Born on May 2, 1972, in West Berlin, Alec Empire was influenced early on by rap and the breakdancing scene. Later he began listening to early punk, and played in several bands during the late '80s. By the turn of the decade Empire became fascinated by the sound of acid and techno, though he detested the drug culture inherent at raves. He began recording EPs for Force Inc - as well as their subsidiary, Mille Plateaux - and formed Atari Teenage Riot in 1992, with Carl Crack and Hanin Elias. A slightly more rock-oriented project, ATR nevertheless focused on the extreme: their political themes and screamed vocals were inspired by punk, but the music concentrated on acid synth and distorted breakbeats. After an Atari Teenage Riot deal with British Phonogram collapsed (see ATR), Empire used the cash in hand from the Phonogram contract to found Digital Hardcore Recordings in 1994, releasing EPs that year by himself as well as EC8OR, DJ Bleed, and Sonic Subjunkies.

In 1994/5, Mille Plateaux released three Alec Empire albums: the compilation Limited Editions 1990-94; his proper debut album, Generation Star Wars; and Low on Ice (The Iceland Sessions). That same year, Atari Teenage Riot recorded 1995, the first album to be released on Digital Hardcore. After two 1996 LPs, Hypermodern Jazz 2000.5 and Les &Eacute;toiles Des Filles Mortes, Empire issued his first breakcore-defining album for Digital Hardcore, The Destroyer. Soon after, the DHR collective ? including ATR and EC8OR ? toured the States at the invitation of Grand Royal Records, the label operated by the Beastie Boys. Grand Royal began releasing 7? singles by Empire, ATR, and EC8OR at the end of 1996. Early the following year, many of Empire's albums were given U.S. releases by his self-formed Geist Records, and Atari Teenage Riot released their American debut, Burn, Berlin, Burn! (compiling tracks from 1995/Delete Yourself! and The Future Of War).

Empire's first post-ATR solo album "Intelligence and Sacrifice", a double album on Digital Hardcore Recordings in 2001 (postponed to 2002 in the West in the wake of 9/11) lead to the English press calling him a rock god. Photos from a Japanese show of this era feature 20,000 kids enraptured as Alec, Charlie Clouser (Nine Inch Nails), Nic Endo (Atari Teenage Riot) and two drummers give it their all. Intelligence and Sacrifice went on to sell impressive numbers and won a Kerrang award. In a 2002 edition of Kerrang Dave Grohl stated: ?He's Alec's number one fan...Trent Reznor (Nine Inch Nails) met Alec backstage at a gig in Australia and declared: ?You inspired me!'?

After great success during his time in London, including the creation of the genre-defining label Digital Hardcore Recordings, Alec decided to return to Berlin and start afresh. ?I wanted to reorient myself completely. I had the feeling I needed to drive my music in another direction.?
For a time Empire played only very select electro shows; just man and machine alone on stage. Then followed the recording of "Futurist" with Nic Endo and band, an art side project on which he played electric guitar displaying a more rock/punk influence. Empire played with different live line-ups and toured in primarily underground and independent venues.

?I remember very clearly how we began ?The Golden Foretaste of Heaven' after ?Futurist'. It happened very quickly. I saw it mapped out before me. England at the edge of Europe - I mean, how often do I have to read about the Beatles' Revolver album? I suddenly found everything from Berlin eastward far more intriguing and exciting. I bought a Russian synthesiser and Nic Endo and I devised a new direction which we're now moving in.?
"The Golden Foretaste Of Heaven" is an album which cannot easily be pigeon-holed, exactly like Alec's fanbase. The album pushes forward with renewed energy. Huge synth riffs meet distortion and electronic guitar. The live shows introduce electronic drum beats and other new features. ?Generally we experimented with my voice and moved away from digital effects to the analogue sound of the 70s... Lee Hazlewood, David Bowie etc...though naturally I sing completely differently. But anyone who is a bit streetwise can see that the tracks can be categorised more as traditional New York rock n roll than Nine Inch Nails".

This change of direction is also evident in the live shows. The Hellish Vortex is the band this time. ?We do not pretend to be four friendly neighbours. We simply share the same vision?. Long-time collaborator Nic Endo controls the show via various machines and is at the centre of the sound. New Yorker David Fisher plays electronic percussion and in doing so enlivens the beats. Londoner Zan Lyons contributes further layers via electric violin and laptop. In a world in which many young bands follow the tradition of guitar, bass and drums, this instrumentation surprises and challenges the audience. "It would not work if The Hellish Vortex did not rock so hard. We don't have to be restricted to an improv-industrial number as we might with another band. We have more in common with Depeche Mode than Neubauten.?

Nothing is ever enough. Changes require extremes. The new label clearly indicates this. Who else would create a new label, Eat Your Heart Out, when he already has a successful genre-defining label in Digital Hardcore?

Since Golden Foretaste Alec has released the mini-album Shivers, scored a number of films including Richard Wilhelmer's short "The Golden Foretaste of Heaven" which was inspired by Alec's album, and completed a new full-length, the release of which has been briefly delayed owing to the unexpected reformation of Atari Teenage Riot, who are touring in support of a new album themselves.

The Golden Foretaste Of Heaven

The Geist Of Alec Empire CD3

The Geist Of Alec Empire CD2

The Geist Of Alec Empire CD1

Low on Ice (The Iceland Sessions)