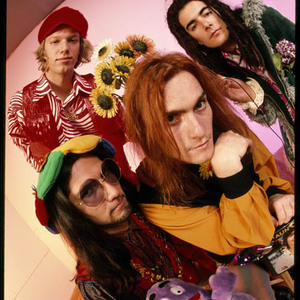 There are at least two artists which use this name: 1. Jellyfish, a power pop band from the United States 2. An alternate tag for ?????????, a visual kei band from Indonesia 1.Jellyfish were a short-lived but highly influential power pop band from San Francisco. The core members were drummer/singer/songwriter Andy Sturmer, keyboard player/multi-instrumentalist Roger Joseph Manning Jr., and guitarist/songwriter/vocalist Jason Falkner.

1. Jellyfish, a power pop band from the United States
2. An alternate tag for ?????????, a visual kei band from Indonesia

Sturmer and Roger Manning formed Jellyfish after the break-up of their previous band, Beatnik Beatch led by bassist / singer Chris Ketner. Prior to joining, Falkner had written and performed on songs from acclaimed Paisley Underground band The Three O'Clock's major-label debut, Vermillion. Roger had met Falkner a while back even before Beatnik Beatch just looking for someone to jam with and Jason was the only person in the classifieds to mention XTC as a reference. Both found the meeting interesting but it ultimately amounted to nothing. In the search for a guitarist before Jellyfish recorded the final tracks Roger gave Jason a call.

Jellyfish released their debut album Bellybutton in 1990. The album contained the band's biggest hit "Baby's Coming Back" which peaked at No. 62 on Billboards Hot 100 Chart. As well as the singles "That Is Why", "I Wanna Stay Home", "Now She Knows She's Wrong" and "The King Is Half-Undressed" (the video for which was nominated for Best Art Direction at the 1991 MTV Video Music Awards).

Frustrated with simply being the guitar player, Jason Falkner left the band after the tour of their debut album. Chris Manning also left the band after the first album but unlike Falkner it was because he just didn't like the touring rock star life style. Andy and Roger recruited Tim Smith and a small handful of studio musicians (including Jon Brion) to fill the void and set forth recording their second album, Spilt Milk, an album far more lush than Bellybutton, incorporating a significant amount of overdubbing and many new instruments.

Increasing creative differences between Sturmer and Manning caused the abrupt end to Jellyfish. Andy Sturmer stayed quiet for a number of years, but has since become legendary for writing catchy pop music|pop songs for Japanese pop phenomenon Puffy AmiYumi and soloist YUKI (formerly front woman and vocalist of the Japanese rock band JUDY AND MARY). Roger Joseph Manning Jr. immediately joined up with Jellyfish live band member Eric Dover in a project called Imperial Drag; worked with Brian Kehew in a band they called The Moog Cookbook and in 2005 he released in Japan his first solo CD called Solid State Warrior retitled, resequenced with some different songs, and released in the U.S. in 2007 as The Land Of Pure Imagination. He also played keyboards for Beck, participating in several records and also remixed some songs for French duo Air. His brother Chris shows up occasionally as a sound engineer.

After leaving Jellyfish, Jason Falkner joined with other disillusioned pop musicians Jon Brion, Buddy Judge and Dan McCarroll (the latter three best known for their work with Aimee Mann) in a band called The Grays. Falkner has gone on to have a successful solo career. Roger Manning and Jason Falkner have recently reunited (along with ex Redd Kross member Brian Reitzell) in a new-wave inspired band called TV Eyes. Reitzell and Manning also joined forces for composing two tracks for the Lost in Translation soundtrack.

2.Jellyfish Band is a band that comes from an indie music community who take an interest in Japanese music are now joining the label nagaswara. Officially formed in January 2009, brought the genre of alternative pop that manned

Jellyfish name was adopted from a Japanese band, it means jellyfish, unique animals in the ocean that has different colors but typical. Jelly Fish hopes his music is more colorful and can be enjoyed by listeners of various genres.

In accordance with their young age, Jellyfish presents the work of the independent music and the young at heart. They mix the music becomes more beautiful with lyrics that have a positive message. Jellyfish style performance while wearing a Japanese costume and everything smelled of Japan starting from hairstyles to accessories.
Jellyfish also continue to strive to evolve and better in music for the future, and improve the quality of his best music for the more advanced in the world music scene Indonesia and Universal in the future.

Fan Club (From The Rare To The Unreleased... And Back Again) CD4

Fan Club (From The Rare To The Unreleased... And Back Again) CD3

Fan Club (From The Rare To The Unreleased... And Back Again) CD2

Fan Club (From The Rare To The Unreleased... And Back Again) CD1