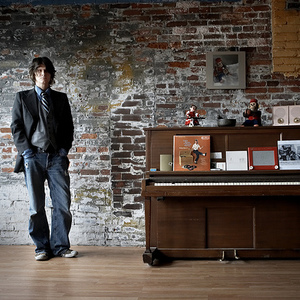 Jim Boggia makes pop like the kind found in record collections when record collections were on... well, records. He makes the verse/chorus/bridge form relevant to current listeners. He combines the best of artists like the Beatles, The Kinks, Harry Nilsson, Simon and Garfunkel, Sly and the Family Stone, Cat Stevens, Stevie Wonder, and a host of others from Pop and Rock's purple patch to form a new musical landscape.

Fans lke Aimee Mann, Jill Sobule (a frequent stage partner and collaborator), and Michelle Branch enjoy his distinctive sound that is both old and new, joyous and infectious. After hearing Boggia's first solo effort, 'Fidelity is the Enemy,' Michelle Branch invited him to open for her last theater tour. Aimee Mann also collaborated with Boggia on two songs, 'Shine' and 'Where's the Party?' for his current album, 'Safe in Sound'..

Boggia's sound is one part his soulful and warm voice and one part expansive and heartfelt songwriting. Whether writing for himself or others, his mastery of lyricism and melody speak to a wide audience. His song 'Glory', written for Jaci Velasquez, became a number 1 Billboard CCM hit. Boggia's latest release fuses his amazing voice and brilliant songwriting to cover familiar topics like the ups and downs of love, the heartbreak of death, and depression. He also covers less than usual topics both light and dark.

Boggia creates a sound that is broad enough to contain not just the requisite bass, drums, guitars, but also glockenspiel, cellos, French horn, and old funky keyboards like Mellotrons and Optigans. He also includes newer technology like loops and virtual synths, even toy pianos, slinkys, and bounced basketballs. With classic songwriting and modern production, Boggia gives the Pop Song a place in the 21st century.