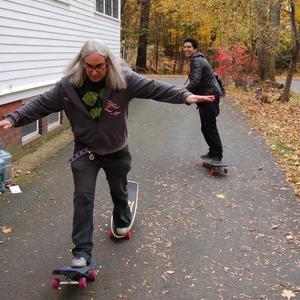 J Mascis (b. 1965) is an American musician and songwriter, probably best-known as the singer, guitarist, and songwriter for Dinosaur Jr., though he has also occasionally worked as a producer and film composer. Born Joseph Mascis on 10th December 1965 in Amherst, Massachusetts, United States, in the early 1980s he founded the short-lived hardcore group Deep Wound with his high school friends Lou Barlow and Scott Helland.

Born Joseph Mascis on 10th December 1965 in Amherst, Massachusetts, United States, in the early 1980s he founded the short-lived hardcore group Deep Wound with his high school friends Lou Barlow and Scott Helland. He started out on drums, but moved to guitar when he went on to found Dinosaur Jr. (with bassist Barlow and drummer Patrick "Murph" Murphy in 1984), which achieved national and international success. After Mascis dismissed Barlow from Dinosaur Jr. in 1989, he recorded several more Dinosaur Jr. albums until 1997, including the 1996 acoustic solo album Martin & Me. He then went on to produce albums with his new band, J Mascis and the Fog, starting in 2000.

In April 2005, Mascis joined up again with Barlow and Murph, as the original trio of Dinosaur Jr., to begin a tour celebrating the re-release of the group's first three albums.

In August 2005, Mascis released a new solo album as J Mascis and Friends, J and Friends Sing and Chant for Amma, an album of devotional songs dedicated to Hindu religious leader Mata Amritanandamayi, or Ammachi, about whom he had previously written "Ammaring" on the first J Mascis and the Fog album More Light. The proceeds from the album are being donated to Tsunami relief efforts by Ammachi's organisation.

In late summer 2005, Mascis helped Danish band Mew by adding vocals to the song "Why Are You Looking Grave?" and backing vocals on "An Envoy to the Open Fields". Both songs can be found on Mew's newest album And the Glass Handed Kites.

In 2006, Mascis released an album with his newly-formed heavy metal band Witch, returning to drumming for their debut album, Witch.

In 2010, J Mascis teamed up with two members of Cobra Verde and one of his Witch bandmates for a new project: Sweet Apple. Like Mascis' Witch side project, Sweet Apple finds J behind the drum kit, although he does plays guitar and sings this time around.

Tied To A Star

Several Shades Of Why