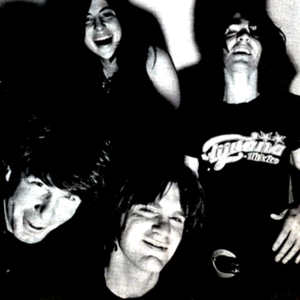 Pussy Galore was an American garage punk band from 1985 to 1990, formed in Washington, DC. Being young Jon Spencer's first band, Pussy Galore was reknowned for their sonic disharmony, capacity for sheer noise power, utter contempt for the local emocore and straight edge bands, and complete disregard for lyrical decency and musical songcraft. The band's earliest incarnation consisted of guitarist and vocalist Jon Spencer, guitarist Julie Cafritz and drummer John Hamill though this line-up would be subject to both change and expansion in later years.

Following the self released 7" Feel Good About Your Body, they added guitarist Neil Hagerty, and replaced Hamill with former Sonic Youth drummer Bob Bert after the band moved to New York City. They further expanded the line-up by taking on then 16 year old Cristina Martinez as a guitarist though she was not really a musician, she had simply taken the photograph for the 7", and recorded the EP Groovy Hate Fuck. The EP, like all of their early releases, would be self-released on their own Shove Records label.

Just prior to the EP's release, they publicly vented their hatred for Dischord Records boss Ian MacKaye and made themselves even more unpopular amongst Washington D.C.'s hardcore punk scene. They subsequently left for New York where they released a limited-edition cassette-only cover album of the Rolling Stones' Exile on Main Street. They followed this up in January 1987 with another self-released mini-set Pussy Gold 5000. Shortly after this Martinez left the band and formed Boss Hog a few years later.

In September 1987, Pussy Galore recorded their debut album and their first recording for another label, Right Now! on Caroline Records. Shortly following the release of Right Now!, Hagerty left the band and was replaced by Kurt Wolf but he was to return to the Pussy Galore line-up following the release of the Sugarshit Sharp EP with Wolf leaving to join Loudspeaker. Their second full-length set Dial M for Motherfucker, was released in 1989 and continued their formula of nihilistic guitar noise and punk rock provocation, with additional studio trickery filling out the material.

They released a split single in 1989, a cover of Black Flag's "Damaged II" with Tad covering "Damaged I" on the other side, for Sub Pop Records and another split single with black snakes for Japanese indie Supernatural Records. They were now a three-piece after Julie Cafritz left. The trio of Spencer, Hagerty and Bert released one final album in 1990 called Historia De La M?sica Rock for Caroline Records before calling it a day the same year.

Spencer co-founded Boss Hog with former Pussy Galore guitarist Cristina Martinez in the late '80s just prior to the dissolution of Pussy Galore itself. Spencer and Martinez had married in 1989 (and are still married today). He also went on to form The Jon Spencer Blues Explosion. Neil Hagerty continued his noise-terrorist career with his girlfriend, self-confessed heroin addict Jennifer Herrema, in blues rock duo Royal Trux, which the pair had formed in Chicago during 1987.

Live: In The Red