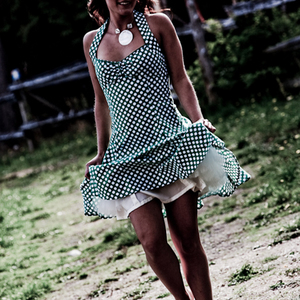 Everyone has a story. What's mine? I'm twenty?three years old, living in a cottage with a recording studio on my parents' organic blueberry farm located on Vancouver Island, British Columbia. I'm fortunate to be surrounded not only by nature at its finest, but also by family, friends, and Tibetan monks who live in the temple across the street. We also guest young WWOOFers (Willing Workers On Organic Farms) that travel to our farm from all over the world to work in exchange for free room and board during harvest season.

Over the past summer, while we were recording my second album When the Bird Became a Book, I'd often run outside between takes to help them chop wood, plant carrots, paint gates, eat way too many handfuls of blueberries, get in a surf or swim, and on several occasions, bump into black bears in the backyard.

My parents are basically what one would call ?children of the sixties' who have instilled in me values for preservation of the environment, social justice and most of all, they exposed me to music, to art. When I was little, my dad had a recording studio in the basement of our house. Both night and day, the walls and floors were rattling to the beats and rhythms of the rap and hip-hop artists that would come in to record. Apparently, I would drape myself in dresses and promenade through their sessions belting random melodies as loud as I could. I was already soul deep in a love affair with music by the time I tackled the rip old age of four. At age five, I danced into the Nutcracker as a sugar plum fairy and over the next eleven years partook in roughly ninety other plays.

Many of the experiences that make up my rather short history sound fictional; I definitely feel blessed to have had so many eye-opening opportunities so early on in my life. Whether it was touring with a Hindu saint from India, meeting the Dalai Lama, trekking around the world with my clothes shoved into a guitar case, self-penning and recording my debut album Sunseed at age nineteen, being taught by Patch Adams how to juggle or, on a more serious note, losing my voice for an entire year while pursuing my acting career in LA because of an eating disorder, or watching my older brother survive a brain tumor, the pages of my past are definitely jam packed with a variety of the good, bad and the very unordinary.

The last couple chapters have been filled with recording, surfing, touring, music, environmental activism, and the new album. In total, my dad and I spent nine months, in the studio recording and mixing. The album is to be released in Japan and Canada early summer 2010, and likewise worldwide through the remainder of the year. Over the next several months, I plan focus more and more on, and become more and more involved in the fight for oceanic and marine life preservation. I am hoping to use my art to bring awareness to the pressing issues at hand, and likewise to inspire. I think music is an exchange of energies, and I love the exchange. It makes me feel good and inspired me to write music that I hope makes other people feel good.

When The Bird Became A Book