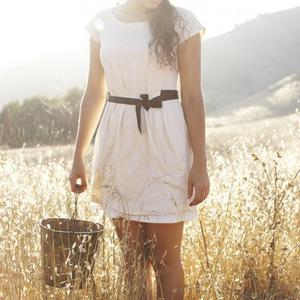 Kina Kasuya Grannis (born August 4, 1985, of Japanese, English, Irish, French, and German descent) is a Japanese-American guitarist and singer-songwriter from Orange County, CA. She started performing in 2001 after getting over with her shyness. Kina independently released her first full-length album, Stairwells, on February 23, 2010. Her music is both sweet and melancholy, but always filled with hope.

Kina started playing shows at the age of four in front of her stuffed animals. Now she plays in front of people, though it wasn't the quickest transition for the admittedly shy songstress. While attending college at USC, Kina often retreated to the secluded stairwells around campus where she could write and sing without being heard. Protected by their quiet confines, she found a safe haven and a creative outlet for her music. Armed with a guitar and a cup of tea, Kina wrote in every stairwell she came across. And it was within these stairwells that she developed her confidence as a songwriter and her poise as a performer.

In 2007, Kina joined YouTube, made a music video and entered herself into a contest. A few months later, her video for ?Message From Your Heart? aired during the Superbowl and its 97 million viewers (or 194 million eyeballs, depending on how you're keeping track) and she walked away with a record deal. Since then, Kina has regularly posted her songs on YouTube, amassing many millions of views, and toured throughout North America. Her songs have been heard on television shows such as ABC's General Hospital and MTV's College Life.