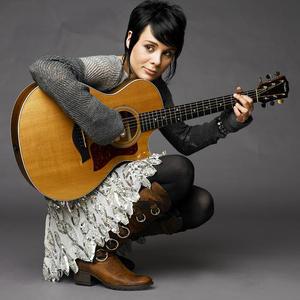 The public discovered this young artist, along with her voice and her talented musicians, through three apparitions at Les Pourris de talent on Musique Plus. After their first broadcasted performance, Musique Plus was flooded with emails praising the band and thought it was crucial to reinvite them. Following their second performance, Pascale and her musicians did not only attract the public's attention, but also the industry's.

The band was then selected to appear on Les pourris de talent album, released by Zone3 and produced by Serge Fiori (Harmonium). They received many contract proposals since then that are currently being considered.

Things are now moving fast for this band from Quebec City whose style -- a rich blend of folk, blues, alternative and pop music -- leaves a warm and friendly feeling. The charisma and emotion carried by their ballads make people want to listen to it over and over again. The band members are Pascale Picard, Mathieu Cantin, Marc-Andre Lebon and Stephane Rancourt. Together, they account for over 3000 live shows and some of them closely worked with well known artists like Noir Silence, Phenomen, Cinnamon, Me and my Bones, Tuppert and many others. Their live and studio experiences, their unique talent and charisma and their continuous determination and integrity make a perfect recipe for success.

Me, Myself & Us, the band's first album, was released in April 2007. Seven months later the album was certified platinum in Canada with more than 100,000 copies sold. The album's first single, Gate 22, remained in the Top 50 Anglophone chart in Quebec for 12 weeks. The Pascale Picard Band were nominated at the 2008 Juno Awards for Artist of the Year, but Feist won that honor in their stead.

In January 2008 the band made a good impression while playing at the Midem, in Cannes, in the hope of opening new horizons in Europe. The single Gate 22 was released in France in March 2008 and the whole album will follow in June.