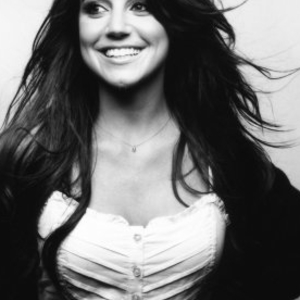 Before Amie Miriello landed in New York to pursue a career in music, the Connecticut native already had more than 10 years of experience singing in front of an audience. The only problem: it was musical theatre, and as Amie tells it: ?I could sing, but I couldn't act worth a damn. I was basically the chorus girl in every show.? In order to get her powerful voice into school productions, directors resorted to casting her as ?Orphan 7? in Oliver and even, memorably, the actual yellow-brick road in The Wizard of Oz.

Amie's difficulty playing any role aside from her straight-talking, take-no-prisoners self probably explains why the attempt to translate her vision to a band turned out to be a false start. Dirtie Blonde, Amie's first signed project, had the olive-skinned, Italian brunette regularly touching up her roots while singing songs that owed more to their collaborators than her own heart. ?It was impossible to lose myself in the music,? she notes. But Amie remained persistent and her passion for expressing herself through song never faltered.

Naturally then, it's Amie's honesty that's impossible to miss on I Came Around, her BellaSonic/Jive/Zomba debut. She insistently declares, ?I'm learning as I go? on the chorus of the title track and first single, offers the spot-on observation that ?I'm older than my skin is in this life? on the piano ballad ?Snow,? and flirts with a crush on ?Brand New.? And while there are assists from some noted producers, the primary contributions come from Amie and her longtime guitarist/collaborator, Jay Dmuchowski. I Came Around conveys Amie's personal vision and regarding the new material she beams, ?I'm just so proud of what I've done.?

It was the two of them, Amie and Jay, who were initially noticed while playing acoustic gigs all over Manhattan. Famed producer Billy Mann, known for his work with everyone from Pink to Martina McBride, had sent a talent scout to a show at Arlene's Grocery where the duo were the opening act. But instead of the headliner, the scout took an interest in Amie and Jay.

Through Billy Mann, Amie befriended powerful A&R exec Teresa LaBarbera Whites, responsible for guiding the careers of Destiny's Child, Beyonc? and Jessica Simpson, among others. Once she arrived at Jive, LaBarbera Whites made Amie her first signing.

Amie's first experience as a signed artist helped her learn to structure songs and polish her songwriting ability. It was also at this point that Amie really cut her teeth as a live performer. ?I got to tour with INXS, Teddy Geiger, Gavin DeGraw and Nick Lachey, and be in front of all these people,? she recalls. ?I really learned how to be a performer. You're not really performing until you're opening for someone, where no one knows who you are and nobody cares. Sometimes you win people over, sometimes you don't.?

Fast-forward to today, Amie's I Came Around (2008) is the first release on LaBarbera Whites' BellaSonic imprint. ?I wouldn't say that I'm a feminist, but I'm very into female empowerment,? Amie observes about her patron. ?Teresa can sit down with some of the most famous and powerful men in this business and not feel the least bit intimidated?and that to me is empowering. To me, she has always said, ?You are a star, and everyone is gonna know it one day.'?

Providing a role model for young women is a key part of Amie's plan. She notes that when coping with the emotional baggage of her parents' divorce and her dislike for school, it was her favorite artists who helped her survive. ?For the most part, my favorite artists are female,? she observes. ?I love Ani DiFranco, Stevie Nicks, Alanis Morissette, Joni Mitchell and Fiona Apple.?

At the same time, this young but seasoned performer has developed a love for writing, calling it her ?favorite part of the whole thing,? adding, ?Of course I want to be successful and make a living. But I also want the opportunity to write different kinds of music my whole life.?

On the strength of her seasoned-sounding debut, Amie could do just that. All she has to do is act naturally.