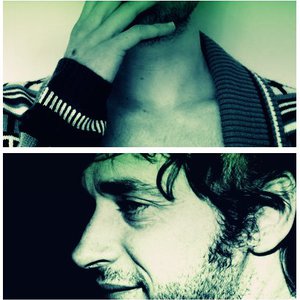 Gustavo Adri?n Cerati Clark (born in Buenos Aires, Argentina on August 11, 1959) better known as Gustavo Cerati is an Argentinean guitarist, producer, occasional bass player, lyricist, and vocalist. During the 1980's and until mid-1990's he was the visible leader of Soda Stereo, -arguably Argentina's most important rock band. Cerati is currently in a coma after suffering a stroke on May 15, 2010 in Caracas during his Fuerza Natural tour.

Cerati is currently in a coma after suffering a stroke on May 15, 2010 in Caracas during his Fuerza Natural tour.

Widely acknowledged for his lead and rhythm guitar talents and also for his ability to play lead solos while singing in perfect key, Cerati is one of the most prolific and important rock musicians in Latin America.

He released his first solo effort Amor Amarillo in 1993, while still a member the band.

Zeta Bosio and then-wife Cecilia Amen?bar collaborated on this project. The album featured more introspective lyrics, a fair amount of electronic experimentation and was well received by both the critics and the public. After 1997, Cerati embarked in a couple of projects that dealt exclusively with electronic music. He formed the group Plan V together with Chilean musicians Andr?s Bucci, Guillermo Ugarte and Christian Powditch, and shortly after the duo Ocio with Flavio Etcheto.

He released his second solo album Bocanada in 1999. The record embraced both the style that made Soda Stereo famous, and a newer style reminiscent of his electronic projects.

In 2001 he wrote the soundtrack for the movie + Bien directed by Eduardo Capilla, in which he also stars and marked his acting debut. Another soundtrack he produced was for the movie "Solo Por Hoy". That same year he recorded 11 Episodios Sinf&oacute;nicos, -a live recording of him singing accompanied by The Buenos Aires Symphonic Orchestra, directed by Alejandro Ter?n.

Ah&iacute; Vamos (2006) was considered a return to his more classic style as it contains heavier rock sounds and a wider guitar/drums presence.

Despite stating previously that the Grammy's were of little importance to him, he attended the Latin Grammy Awards ceremony on November 2, 2006 where he won for Best Rock Album and Best Rock Song.

In 2007 Cerati toured for one last time with his old band Soda Stereo for a reunion tour, that took them all across Latin America and the United States.

Cerati has also produced albums for other artists, most notably "Sue?os en Transito" for Nicole and "Mar" for Leo Garcia. Historically he has also contributed on several albums for artists such as Fricci&oacute;n, Caifanes, and Shakira. He also joined forces with The Police's guitarist Andy Summers for a Spanish version of "Bring On The Night" / "Tr?eme La Noche".

On July 7, 2007 he performed at Live Earth with Shakira in Germany.