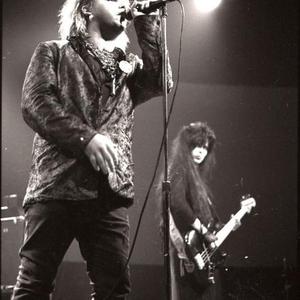 The Gun Club was an American punk band from Los Angeles in the 1980s led by flamboyant singer and guitarist Jeffrey Lee Pierce. The Gun Club merged the contemporary genre of punk rock with the more traditional genres of blues, rockabilly and country music. Along with X, The Flesh Eaters and The Blasters, they helped set the tone of the Hollywood rock scene of the 1980s and are cited as a "tribal psychobilly blues" band.

The Gun Club was formed by Jeffrey Lee Pierce, former head of the Blondie fan club in Los Angeles. Joining him was Brian Tristan, who was later renamed Kid Congo Powers during his stint with The Cramps, Don Snowden, who was at the time a music critic for the Los Angeles Times, and Brad Dunning.
Being among the first bands to combine punk and blues, The Gun Club has had a lasting influence on many artists. The White Stripes have been known to cover "For the Love of Ivy" and "Jack on Fire", off the band's debut album, at live shows. Of The Gun Club's music in particular, the band's vocalist and guitarist Jack White has said, "'Sex Beat', 'She's Like Heroin To Me', and 'For The Love Of Ivy'...why are these songs not taught in schools?"