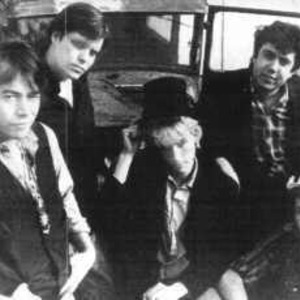 Originally a quasi-psychedelic American rock band with the sound of the southwestern desert thrown in. GOR came out of Tucson, Arizona and quickly relocated to L.A. where they became (somewhat dubiously) a part of the Paisley Underground scene. Their music was alt-country long before such a thing existed, and it bore more in common with Neil Young or Cali-country rock than any of their contempories.

Their music was alt-country long before such a thing existed, and it bore more in common with Neil Young or Cali-country rock than any of their contempories. Dan Stuart was like an Arizona version of Frank Black with a touch of Merle Haggard and the Eagles. The earlier records sound like lo-fi country-rock, with themes of low-life Americana and hard times among the underclass. They wrote amazing lyrics with Stuart (and also keyboardist Chris Cacavas) narrating it all. As the years went on the music becomes more and more polished with a subtler blend of blues, rock, and a little country. They worked with some heavy production teams.

"The band issued a self-released red vinyl EP, sometimes called Two Bibles, though its first widely available record was an EP issued in 1982 by Dream Syndicate leader Steve Wynn on his own Down There label. Original drummer Van Christian left shortly before this (he later was in Naked Prey). They picked up Alex MacNicol from Lydia Lunch to fill out the ranks. Green on Red followed the Dream Syndicate onto Slash Records, which released the album Gravity Talks in the fall of 1983. Another label change happened shortly after this.
1985- Before "Gas Food Lodging" guitarist Chuck Prophet joined, barely out of his teens, and added blistering guitar that mixed Keith Richards and California sound with a touch of Willie Nelson. The duo of Stuart and Prophet would enhance their sound and prove a lasting relationship. Drummer Alex MacNicol was replaced by Keith Mitchell around '86. That same year, Stuart collaborated with Steve Wynn (as "Danny and Dusty") on the album "The Lost Weekend" (which also included Cacavas on some tracks).

Touring and critical acclaim helped them gain a following in (especially) UK and Europe. A major record deal with Phonogram/Mercury in the mid-80s set them for launch. They put out two good albums, "No Free Lunch"(1985) and "The Killer Inside Me"(1987), but the tides had changed, and they failed to break through. Right before their last show at the Astoria in London,UK, Dan Stuart has a mental breakdown and the show is cancelled. By early 1988 Green on Red was Dan Stuart and Chuck Prophet. Cacavas went on to fairly successful solo career both solo and with his band, Junkyard Love. He is still very popular in Europe where he has quite a following. Bassist Jack Waterston put out one release,"Whose Dog?"(1990), before opening a guitar store in LA. The other members drifted apart. Mid-80's drummer Keith Mitchell was later in Mazzy Star in the 1990s.

They made "Here Comes the Snakes"(1989) in Memphis with producer Jim Dickinson. "This Time Around" (1990) was their last one for Mercury Records. Then "Scapegoats" (1991) which garnered them critical acclaim again in Europe. After "Too Much Fun"(1992) they continued sporadically through the next year before calling it quits.

Dan Stuart made one solo "Can O' Worms" in 1995 before leaving the business to become a writer.

Chuck Prophet has had the greatest success as a solo artist and put out a number of good releases as of 2006. He tours regularly and is in a band with his wife, Stephanie Finch, called Go Go Market.

The remaining original members of Green On Red reunited in Sept 2005 to play a memorable show at the Hotel Congress in Tucson. Later, that winter, a reunion show took place at the Astoria in London, England to make good on the promise to finish an aborted 1987 tour! More shows are promised for later. The new Danny and Dusty release, "Cast Iron Soul", came out in April 2007. A subsequent tour in Europe followed.

What Were We Thinking?

The Best Of Green On Red

The Killer Inside Me