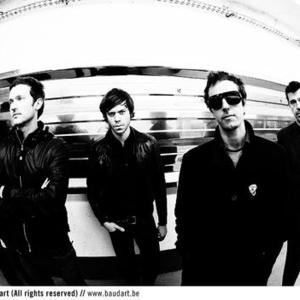 Ghinzu is an Alternative rock band from Belgium. They were formed in 1999 by a group of musicians who had been on the Belgian rock scene for a number of years, named after a Japanese knife-brand. The current line-up consists of John Israel (also known as "John Stargasm") (vocals, keyboard), Mika Nagazaki (bass), Greg Remy (guitar), Antoine Michel (drums), Jean Waterlot (keyboard, guitar). Former members include Kris Dane (keyboard, guitar), Fabrice Georges (drums) and Sanderson Poe (contrabass).

Their first album, Electronic Jacuzzi, was released in December 2000 labelled by their own Label Company Dragoon and sales quickly topped several thousand. Recorded over several sessions in the spring and autumn of 1999 and 2000, it marks a turning point in contemporary pop and features 12 tracks that travel between groove and noise in an inimitable style.

The rhythm section is relaxed, radical and original, producing a soaring, elastic groove in perfect contrast to the sound of the guitar and doublebass. This adds a tragic quality to the elegance that the group exudes. This vicious aesthetic evokes the essential elements in pop: piano, trash synths, no-wave melodies and addictive rhythms that create a dramatic tension, bringing to the forefront the tragic necessity that drives rock. But this maturity allows for experimentation: bass duos, piano ballads accompanied by cutting breakbeats, distortions and self-deprecating humour, speed-pop and of course the noise holding it all together. It is modern music whose very conception demands a fresh approach to listening to and playing music. Ghinzu brings out the sounds of the instruments rather than playing them in the standard way.

The first two singles from the album are "Dolly Fisher" (a song about the possibilities of romance between man, plastic and voodoo dolls) and "Electronic Jacuzzi" (dedicated to dancefloor fetishists). "Dolly Fisher" was immediately put on the Radio 21 playlist before it was even released. This success was followed by several appearances on different Belgian TV stations and a tour that started in 2000 and finished in 2002, taking in around 50 gigs and a mini tour of Flanders.

Ghinzu released their second album, Blow, in February 2004, an album full of the soul that drives those who live rock as a passage to a different life. The pleasure of listening to this album is in losing yourself within the music and discovering the most incredible characters, the maddest adventures and the most poignant of destinies. An album made to move you without a second thought, in the same way that rock and roll is played. The lyrics exude a kind of venomous dandyism, a sarcastic yet tender vision that draws out social vignettes showcasing the heroes of daily sex and taunting the aristocracy. This exquisite finesse clashes with the controlled and jubilant anarchy of their concerts, as if to assert the undercurrent of the album.

Everyone has the right to boredom, and only a handful have the duty to fight it- Ghinzu is one of them.

In August and September 2003, Ghinzu played several festivals to try out their new compositions on stage with their new multi-instrumentalist Kris Dane. Kris has already proved his talents as a solo artist, and he strengthens Ghinzu on stage, playing keyboards and guitar as well as singing. These dates included very well received concerts at Nandrin Festival and the Nuits Botaniques.

Convinced of the talent and relevance of the group to the modern music world, they were signed by Bang! for distribution and Ghinzu returned to the studio to finish "Blow", after four years of sharpening their venomous dandyism.

Ghinzu was also selected by RTBF to represent Belgium in the European showcase festival "Eurosonic", which took place in the Netherlands on 9 January 2004. Following this gig, a number of foreign festivals in the Netherlands, Germany and the UK showed in interest in attracting Ghinzu.

2004 was also the year of a sell out gig at the Ancienne Belgique in Brussels, where Ghinzu played together with two other bands (Girls in Hawaii and Sharko), which was covered by all the Belgian Media.

In Autumn 2004, Ghinzu played a French Tour of around 20 dates to promote their new album (released 7 September). The album was released under the 'Atmospheriques' label (Tarmac, Tahiti 80...), while Radical (Placebo, Moissec, Blonde Redhead) took charge of the French leg of the tour.

In 2005, Ghinzu started the new year with a tour of a few dates in the Netherlands (Venlo, Nijmegen, Tilburg, Den Bosch), where they had been eagerly awaited since the release of Blow and their appearances at several festivals the previous summer (Valkhofaffaire in Nijmegen, Zinin Festival in Utrecht).

This was followed by a second sell out gig at the Ancienne Belgique in Brussels on 26 January, this time all by themselves.

After another sell out gig at Paris' L'Elysee Montmartre on 1 February, Ghinzu played their first few gigs in Switzerland. Their tour ended with an invitation to participate in the Montreux Jazz Festival on 15 July supporting the.

Ghinzu is now in the process of winning over the European public by their irrepressible live performances, backed up by an album which has already made its mark. Before starting their summer festivals tour they will be playing the mythical Olympia on 13 June which has already sold out.