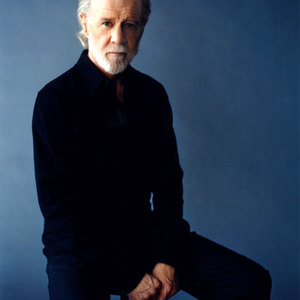 George Denis Patrick Carlin (May 12, 1937 - June 23, 2008) was a Grammy-winning American stand-up comedian, actor, and author. Carlin is especially noted for his irreverent attitude and his observations on language, psychology, and religion along with many taboo subjects. In fact, Carlin and his "Seven Dirty Words" comedy routine were central to the 1978 U.S. Supreme Court case F.C.C. v. Pacifica Foundation, in which a narrow 5-4 decision by the justices affirmed the government's right to regulate the public airwaves.

Carlin is especially noted for his irreverent attitude and his observations on language, psychology, and religion along with many taboo subjects. In fact, Carlin and his "Seven Dirty Words" comedy routine were central to the 1978 U.S. Supreme Court case F.C.C. v. Pacifica Foundation, in which a narrow 5-4 decision by the justices affirmed the government's right to regulate the public airwaves.

George Carlin's latest stand up routines were primarily focused on attacking the flaws in modern-day America. He often took on contemporary political issues in the United States and satirized the excesses of American culture.

He is considered by many to have been a successor to the late Lenny Bruce and was ranked by Comedy Central as the second greatest stand-up comedian of all time behind Richard Pryor.

Born in New York, New York, George Carlin grew up on West 121st Street, in a neighborhood of Manhattan which he later said he and his friends called "White Harlem", because that sounded a lot tougher than its real name, "Morningside Heights". "General Grant was one of my neighbors," he would say later. He was raised by his mother, who left his father when Carlin was two years old. At age 14, Carlin dropped out of Cardinal Hayes High School and later joined the United States Air Force, training as a radar technician. He was stationed at Barksdale AFB in Bossier City, Louisiana.

During this time he began working as a disc jockey on KJOE, a radio station based in the nearby city of Shreveport. He did not complete his Air Force enlistment. Labeled an "unproductive airman" by his superiors, Carlin was discharged on July 29, 1957. In 1959, Carlin and Jack Burns began as a comedy team when both were working for radio station KXOL in Fort Worth. After successful performances at Fort Worth's beat coffeehouse, The Cellar, the two headed for California in February 1960 and stayed together for two years as a team before moving on to individual pursuits. the 1960s, Carlin began appearing on television variety shows, notably The Ed Sullivan Show.

Eventually, Carlin changed both his routines and his appearance. He lost some TV bookings by dressing strangely for a comedian of the time, wearing faded jeans and sporting a beard and earrings at a time when clean-cut, well-dressed comedians were in vogue. Using his own persona as a springboard for his new comedy, he was presented by Ed Sullivan in a performance of "The Hair Piece," and quickly regained his popularity as the public caught on to his sense of style.

In this period he also perfected what is perhaps his best-known routine, "Seven Words You Can Never Say on Television", recorded on Class Clown, a routine which offended some. Carlin was arrested in 1972 at Milwaukee's Summerfest and charged with violating obscenity laws after performing this routine. In 1973, a man complained to the FCC that his son had heard a later, similar routine, "Filthy Words", from Occupation: Foole, broadcast one afternoon over WBAI, a Pacifica Foundation FM radio station in New York City. Pacifica received a citation from the FCC, which sought to fine Pacifica for allegedly violating FCC regulations which prohibited broadcasting "obscene" material. The U.S. Supreme Court upheld the FCC action, by a vote of 5 to 4, ruling that the routine was "indecent but not obscene", and the FCC had authority to prohibit such broadcasts during hours when children were likely to be among the audience. F.C.C. v. Pacifica Foundation, 438 U.S. 726 (1978).

The controversy only increased Carlin's fame (or notoriety). Carlin eventually expanded the dirty-words theme with a seemingly interminable end to a performance (ending with his voice fading out in one HBO version, and accompanying the credits in the Carlin at Carnegie special for the 1982-83 season), and a set of 49 web pages organized by subject and embracing his "Incomplete List Of Impolite Words". Ironically, the court documents contain a complete transcript of the routine, perhaps validating what Oliver Wendell Holmes, Jr. said: "You cannot define obscenity without being obscene."

In the 1970s, Carlin became known for unpredictable performances. He would walk off if no one laughed, verbally insult the audience, or simply not appear.

Carlin unexpectedly stopped performing regularly in 1976, when his career appeared to be at its height. For the next five years, he rarely appeared to perform stand-up, although it was at this time he began doing specials for HBO as part of its "On Location" series. His first two HBO specials aired in 1977 and 1978. It was later revealed that Carlin had suffered the first of his three heart attacks during this layoff period.

In 1981, Carlin returned to the stage, releasing A Place For My Stuff, considered by many to be his best album since Class Clown, and making a triumphant return to HBO (and to his hometown) with the Carlin at Carnegie special videotaped at Carnegie Hall and airing during the 1982-83 season. Carlin continued doing HBO specials every year or every other year over the following decade and a half. All of Carlin's albums from this time forward are the HBO specials.

By 1989, Carlin had become popular with a new generation of teens when he was cast as Rufus, the mentor of the titular characters in Bill & Ted's Excellent Adventure and reprised his role in the film sequel Bill and Ted's Bogus Journey as well as the first season of the cartoon series. In 1991, he provided the narrative voice for the American version of the children's show Thomas the Tank Engine & Friends, a role he continued until 1998. He played "Mr. Conductor" on the PBS children's show Shining Time Station which featured Thomas from 1991 to 1993. Also in 1991, Carlin had a major supporting role in the movie Prince of Tides along with Nick Nolte and Barbra Streisand.

Carlin began a weekly sitcom, The George Carlin Show, cast as "George O'Grady", a New York City cab driver, for the Fox Network in 1993. He quickly included a variation of the "Seven Words" in the plot. The show lasted 27 episodes before being canceled in December 1995.

In 1999, Carlin returned with an appearance in Kevin Smith's film Dogma as a greedy Roman Catholic cardinal. He worked with Smith again with a cameo appearance in Jay and Silent Bob Strike Back, and in an unusual change, Carlin portrayed a prominent, serious role in Jersey Girl as the blue collar dad of Ben Affleck's character.

In 2001, Carlin was given a Lifetime Achievement Award at the 15th Annual American Comedy Awards.

In December 2003, California U.S. Representative Doug Ose introduced a bill (H.R. 3687) to outlaw the broadcast of Carlin's seven "dirty words", including "compound use (including hyphenated compounds) of such words and phrases with each other or with other words or phrases, and other grammatical forms of such words and phrases (including verb, adjective, gerund, participle, and infinitive forms)". (The bill omits "tits", but includes "ass" and "asshole", which were not part of Carlin's original routine.)

In December 2004, Carlin announced that he would be voluntarily entering a drug rehabilitation facility to receive treatment for his dependency on alcohol and painkillers.

In 2004, George Carlin was ranked #2 on Comedy Central's 100 greatest standups of all time list, behind Richard Pryor.

For years, Carlin performed regularly as a headliner in Las Vegas, but in the spring of 2006 decided to end his performing there. He began a tour through the first-half of 2006, and had a new HBO Special on November 5, 2005 entitled Life is Worth Losing, which was shown live from the Beacon Theatre in New York City. Topics covered included suicide, natural disasters (and the impulse to see them escalate in severity), cannibalism, genocide, human sacrifice, threats to civil liberties in America, and how an argument can be made that humans are inferior to animals. The tour's original title of "I Kinda Like it When a Lotta People Die" was changed because of the Hurricane Katrina disaster which occurred 2 months before the tour started.

On February 1, 2006, Carlin mentioned to the crowd, during his Life is Worth Losing set at the Tachi Palace Casino in Lemoore, California, that he had been discharged from the hospital only six weeks previously for "heart failure" and "pneumonia", citing the appearance as his "first show back".

Carlin provided the voice of Fillmore, a character in the Pixar animated feature Cars, which opened in theatres on June 9, 2006. The character Fillmore is a VW Microbus, whose front license plate reads "51237" ? Carlin's birthday ? and is also the zip code of a town in Iowa named George.

Carlin has often denounced the idea of God in interviews and performances, most notably with his "Invisible Man in the Sky" and "There Is No God" routines. In mockery he invented the parody religion Frisbeetarianism for a newspaper contest. He defined it as the belief that when one dies "his soul gets flung onto a roof, and just stays there", and cannot be retrieved.

Carlin has also facetiously stated he worships the Sun, because he can actually see it, but prays to Joe Pesci (his good friend in real life) because "he's a good actor", and "looks like a guy who can get things done!", and praying to him has approximately the same 50% success rate as praying to God. The extent to which Carlin is an atheist, however, may be somewhat questionable.

In an interview on CNN's Larry King Live, Carlin described his religious beliefs as "acrostic," commenting that the intricate nature of spirituality is comparable to a puzzle and altogether confusing at times. Thus, even though he does not subscribe to organized religion, he also does not maintain those absolute views that can be found in his comedic act in his everyday life. When it comes to religion, Carlin notes that there are far more questions than answers.

On June 22, 2008, Carlin died of heart failure in Santa Monica, CA, at the age of 71. He had a history of cardiovascular issues, including several heart attacks.

On June 18, 2008, it was announced That George Carlin will be awarded the Mark Twain Prize for American Humor.

The John F. Kennedy Center for the Performing Arts said Tuesday that Carlin will be honoured for his 50-year career as a Grammy-winning standup comedian, writer and actor. He will be the 11th recipient of the award. It will be presented November 10, 2008 at a tribute performance that will be televised by PBS.

Carlin has released 22 solo albums and three bestselling books. He starred in a variety of TV and movie roles and is famous for his ''Seven Dirty Words'' routine.

I Kinda Like It When A Lotta People Die (Explicit)

It's Bad For Ya

Life Is Worth Losing

When Will Jesus Bring The Pork Chops? CD6

When Will Jesus Bring The Pork Chops? CD5

When Will Jesus Bring The Pork Chops? CD4

When Will Jesus Bring The Pork Chops? CD3

When Will Jesus Bring The Pork Chops? CD2

When Will Jesus Bring The Pork Chops? CD1