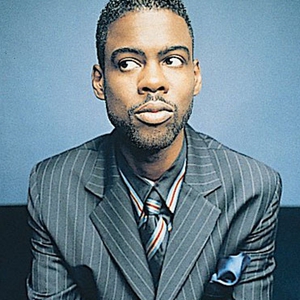 Christopher Julius Rock III (born February 7, 1965 in Andrews, South Carolina) is an American Grammy and Emmy Award winning comedian, actor, screenwriter, television producer, film producer and director. He was voted by Comedy Central as the fifth greatest stand-up comedian of all time after having success on shows such as Saturday Night Live, performing sold out shows all over the world, starring in many Hollywood movies and releasing four highly successful comedy albums.

Around 1984 Rock slowly rose up the ranks of the comedy circuit in addition to earning bit roles in films such as New Jack City and I'm Gonna Git You Sucka. Upon seeing his act at a nightclub, Eddie Murphy recommended Rock for Saturday Night Live. He was a cast member of the popular sketch comedy series from 1990?1993. His tenure on the show gave Rock national exposure; but he was rarely used on the show, save for his recurring Nat X character. Rock was fired from SNL in the spring of 1993 as part of a regular cast turnover. Chris took the firing to concentrate on a film career and to lend his talent to the then-fading sketch show In Living Color. Unfortunately, acting jobs were few; so Rock abandoned Hollywood to concentrate on stand-up comedy. In 1991, he released his first comedy album, Born Suspect. He starred in his first HBO comedy special in 1993 titled Big Ass Jokes.

His second 1996 stand-up special Bring the Pain reinvented Chris Rock as one of the hottest comedians in the industry. His routine, which featured commentaries on race in America, stirred up a great deal of controversy. Adding to his popularity was his much-publicized role as a commentator for Comedy Central's coverage of the 1996 Presidential elections.

Rock has since had two more HBO comedy specials: Bigger and Blacker in 1999, and Never Scared in 2004. Articles relating to both specials called Rock "the funniest man in America" in Time and Entertainment Weekly, respectively. HBO also aired his talk show, The Chris Rock Show, which gained critical acclaim for Rock's interviews with celebrities and politicians. His specials and talk show established Rock as one of the preeminent stand-up comedians and comic minds of his generation. His television work has won him 3 Emmy Awards and 15 nominations for his performing and writing. In 2004, Rock was named the 5th Greatest Stand-Up Comedian of All-Time by Comedy Central. During this time, Rock also translated his comedy into print form in the book Rock This! and released two bestselling comedy albums, Roll with the New and Bigger and Blacker.

While Rock has acted in movies since 1986 (beginning with a small role in Beverly Hills Cop II), it was not until the success of his stand-up act in the late 1990s that Rock began receiving major parts in films. These include roles in Dogma, Beverly Hills Ninja, Lethal Weapon 4 and Nurse Betty and a starring role in Down to Earth. Rock has also increasingly worked behind the camera, both as a writer in CB4 and director of Head of State and the upcoming I Think I Love My Wife. In the fall of 2005, the UPN television network premiered a comedy series called Everybody Hates Chris, based on Rock's school days, for which he is the executive producer and narrator.

His comedy typically involves race relations in the United States, music, romance, and class relationships. Though not directly based on it, many of his comedic views are rooted in his teen years; his very strict parents, concerned about the neighborhood schools, had him bused to an almost all-white high school in Bensonhurst (an Italian-ethnic neighborhood of Brooklyn that was known at the time for poor race relations). Rock claims to have been arrested four times: once for vehicular assault on a youth who had robbed him, and three times for traffic violations, including driving without a license and "driving too slow".

Cheese And Crackers: The Greatest Bits

Roll With The New