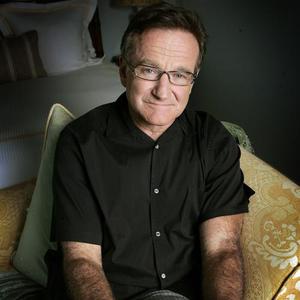 American comedian Robin McLaurin Williams (born July 21, 1951 in Chicago, IL) began his career as a cocaine-addled improv stand-up comedian, who made a living on tips in the late '70s. Soon after, he achieved national fame as the TV character Mork, an alien who guest-debuted on Happy Days before starring in the successful ABC series Mork & Mindy. Suffering a divorce and achieving sobriety in the late-'80s, his career was even further boosted with a series of sobering late-'80s dramas (Good Morning, Vietnam and Dead Poets' Society) and numerous '90s family films (Aladdin and Mrs.

Doubtfire). By the late 90s, after fear of being typecast in roles such as those played in Patch Adams and Bicentennial Man, he landed darker roles in films such as Insomnia, One Hour Photo and Death To Smoochy. Ironically, he was voted "Most Likely To Not Succeed" in high school and is now an Oscar-winning actor and comedian, now considered an A-list celebrity who donates to charities on a regular basis. Sadly, on August 9, 2006, Williams entered himself into a rehabilitation center for alcoholism.

On August 2nd, 2008, he released his new comedy act, and is now considered one of the best comedic actors in the United States.

Robin's latest album, Weapons of Self Destruction, is available at his Official Website.

Weapons Of Self Destuction

Weapons of Self Destruction

A Night At The Met

Reality... What A Concept (Vinyl)