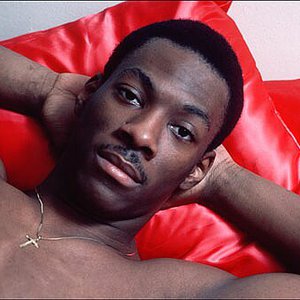 Edward Regan Murphy (born April 3, 1961 in Brooklyn, New York) is an Academy award-nominated actor and comedian. He has also enjoyed a singing career. Here is some background information on his recordings from Party All The Time Songfacts: Eddie Murphy actually has had an extensive singing career, it's just not his biggest claim to fame. His biggest hit was "Party All The Time," which reached #2 in the US in 1985.

He had another Billboard Hot 100 hit single in 1989 with the cringe-inducing title "Put Your Mouth On Me," which reached #27. Besides two solo music albums, he's also done some of the songs in films he's appeared in, such as the Shrek franchise and 1988's Coming to America. He's also provided vocals in odd places like Saturday Night Live sketches ("Wookin' Pa Nub," anyone?), backing for The BusBoys, and hey, even appeared in Michael Jackson's video "Remember The Time."

Murphy began his comedy career at the age of 16, as part of a comedy duo with fellow comedian Mitchell Kyser at the Roosevelt Youth Center in Roosevelt, Long Island, where he grew up. At 19 he became a performer on NBC's Saturday Night Live television show, not long after graduating from Roosevelt Junior-Senior High School. His characters include a parody of Buckwheat from the Little Rascals and an inner-city black version of Fred Rogers known as "Mr. Robinson". Former SNL writer Margaret Humphert has said Murphy and Bill Murray are the two most talented people in the history of the show. Murphy left the show midway through the 1983-1984 season, appearing in filmed sketches for the remainder of that season.

Murphy later starred in many comedies including the Beverly Hills Cop series. He was recognized by receiving a Golden Globe nomination for best actor in a comedy or musical for his performances in Beverly Hills Cop, Trading Places, The Nutty Professor, and most recently Dreamgirls. [1]

In some of his films, he plays multiple roles in addition to his main character, including Coming to America, where he played four radically different characters, the Nutty Professor films, where he played much of the Klumps clan, and 2007's Norbit. Another trademark of Eddie Murphy's is his deep, infectious, and considerably goofy laugh.

In a 2005 poll to find The Comedian's Comedian, he was voted amongst the top 50 comedy acts ever by fellow comedians and comedy insiders. Eddie Murphy's older brother, Charlie Murphy, is also an actor, best known recently for his appearances on Chappelle's Show.

How Could It Be

Party All The Time (CDS)