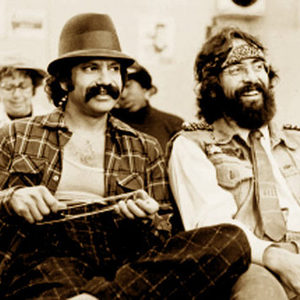 Cheech & Chong are a comedy duo consisting of Richard Cheech Marin and Tommy Chong, who found a wide audience in the 1970s and 1980s for their stand-up routines, which were based upon the era's hippie, free love and (especially) drug culture movements. Cheech played a cholo from Los Angeles, while Chong was a burnt-out "druggie" whose entire life revolved around getting high. The duo released a number of successful comedy albums, and starred in a series of low-budget films, becoming one of the most successful comedy teams of all time.

The duo released a number of successful comedy albums, and starred in a series of low-budget films, becoming one of the most successful comedy teams of all time. Their best-known comedy routines include "Earache My Eye," "Basketball Jones," "Santa Claus And His Old Lady," and "Sister Mary Elephant." Perhaps their all-time most famous line is "Dave's not here, man" (from their self-titled debut album). The two were close. Chong stated that Cheech was "closer than a wife. The only thing we didn't do was have sex."

The duo separated in the 1980s due to creative differences. Cheech Marin has separated himself from the pair's drug-addled act by working on a solo career, finding success in a one-hit wonder song entitled "Born In East L.A." (based on Bruce Springsteen's "Born in the U.S.A."). He did character voices for several animated feature films, including Disney's Oliver and Company (1988) and The Lion King (1994), as well as starring in various comedy films including Shrimp on the Barbie, as a lead in the CBS television series Nash Bridges and a recurring guest role on Judging Amy.

Tommy Chong also pursued a solo career, starring in such comedies as Far Out Man. He had co-starred on the Fox Television series That '70s Show in which he played Leo, a burned-out hippie very similar to his character Anthony Stoner (Man) in the movie Up in Smoke (1978).

The two reunited when they did voices for an episode of South Park, though their voices were recorded separately.

After their contentious parting in the '80s, the duo had a less-than-stellar friendship. Chong recalled going to Cheech's birthday party in 1994 and seeing Cheech "on the couch with his arm around his wife like we had just met. It wasn't comfortable."

The duo had plans to reunite for another film when Tommy Chong's California-based company, Chong Glass, was raided by federal officials on February 25, 2003, as part of a federal crackdown on "drug-related paraphernalia." Tommy Chong pleaded guilty to charges of distributing drug paraphernalia in May and on September 11, 2003 was sentenced to 9 months in federal prison, fined USD $20,000, and forced to forfeit USD $120,000 in assets. He served the time between October 8, 2003 and July 7, 2004. With Chong off the hook, the duo planned to resume production on their latest opus. A variety of titles were rumored, including Grumpy Old Stoners. Cheech and Chong announced on September 8th that the reunion film had been cancelled.

From 2008 onward the two have teamed up again and done performances.

Up In Smoke (Parental Advisory)

Get Out Of My Room