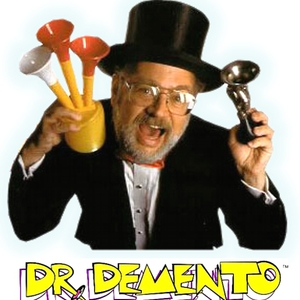 Dr. Demento (born April 2, 1941 in Minneapolis, Minnesota) is the stage name of Barret Hansen [1], who has made a successful career as a radio disc jockey specializing in novelty songs and pop music parodies. He created the persona in 1970 while working at Los Angeles station KPPC-FM. Legend has it, after Hansen played "Transfusion" by Nervous Norvus on the radio, someone said that he had to be demented to play that. Thereafter, the name stuck.

His weekly show went into syndication in 1974 and is still on the air as of 2006. He has also released many compilations of music featured on his show on vinyl records, audio tape cassettes, and compact discs.

To some people, he is best known as the man who brought rock parodist "Weird Al" Yankovic to national attention, as well as Elmo and Patsy's 1979 Christmas song "Grandma Got Run Over by a Reindeer".

Hansen was born the son of an amateur pianist and claims to have started his vast record collection as early as age 12, when he found "that a local thrift store had thousands of old 78 RPM records for sale at 5 cents each". He attended Reed College, where he wrote his senior thesis on Wagnerian opera, graduating in 1963, and later studied at UCLA, from which he earned a master's degree in folklore and ethnomusicology.

Hansen has developed a particular interest in the roots of rock 'n' roll in R&B and country music, and he has written about it in many magazine articles, liner notes to compilations and new recordings by a variety of artists, and two chapters on early R&B for The Rolling Stone Illustrated History of Rock & Roll. His shows and public appearances display an encyclopedic knowledge of the history of recorded music in general, from the earliest Edison cylinder recordings onward.