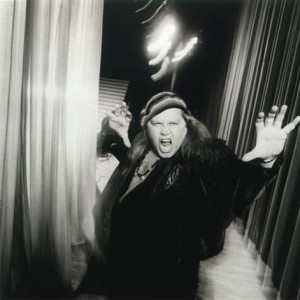 Samuel "Sam" Burl Kinison (December 8, 1953 ? April 10, 1992) was an American stand-up comedian and actor. He was famous for his raunchy humor and wild, colorful outfits. A former revival-style preacher, his standup routines were most often characterized by intense, angry ranting punctuated by a trademark primal scream. Kinison was born in Yakima, Washington, and originally became a preacher. Upon obtaining a divorce from his wife, he was forced to leave preaching. However, his background as a preacher proved to be highly influential upon his new career as a comic.

Kinison was born in Yakima, Washington, and originally became a preacher. Upon obtaining a divorce from his wife, he was forced to leave preaching. However, his background as a preacher proved to be highly influential upon his new career as a comic. This was particularly evident in the near-fire and brimstone style of screaming used in his routines. Shortly before his death he took to the pulpit one last time.

Kinison's appearance on Late Night with David Letterman on November 14, 1985 is widely considered to be his breakthrough performance. Letterman's introduction of Kinison would prove to be prescient: "Brace yourselves. I'm not kidding. Sam Kinison."

Kinison might be considered a "rock and roll comedian" since he occasionally was accompanied by a touring band, as well as having a prodigious appetite for drugs and alcohol. In 1988, he had a hit song with his novelty version of the troggs' "Wild Thing." The video for his version of "Wild Thing" played like a who's who of rock artists, from bad boy Billy Idol, and rock guitar god Steve Vai, to guitar god Frank Zappa's son Dweezil Zappa, and a raunchy "roll on the mat" dance with Jessica Hahn. Sam hammered out some licks on a custom Stratocaster with an airbrush picture of his face frozen in his famous scream. One of his albums featured four songs performed by him and his band, and during one notable The Tonight Show Starring Johnny Carson performance, he delivered what began as a beautifully rendered version of Elvis Presley's "Are You Lonesome Tonight," but which descended into angry ranting during the spoken breakdown.

Some of Kinison's most spontaneous moments came during his frequent appearances on Howard Stern's radio show. He made an angry phone call on-air to Bobcat Goldthwait. He embarrassed comedienne Judy Tenuta to the point of driving her off the show, as he sat in with Penn Jillette, Chuck McCann, and Jack Riley. His most notorious stunt resulted in a highly entertaining on-air feud with Stern: he made an on-air promise to bring to the show members of the rock-n-roll band Bon Jovi, with whom Stern was feuding, but they never showed up. It turned out that Bon Jovi had no intention of going. Kinison, upon discovering this, decided not to call Stern out of fear of embarrassing Bon Jovi. Stern's reaction was swift and vindictive, bringing about the eventual apology of Kinison, but not before one of the show's funniest moments in which comedian Gilbert Gottfried and Stern both savaged an emotionally charged phone call Stern had with Kinison, during which both stars used the words "man" and "dude" toward one another so often that Gottfried and Stern went into stitches on hearing the playback. Stern and Kinison eventually made up, and paired on Stern's pay-per-view special, U.S. Open Sores. Today Howard Stern remembers Kinison fondly and acknowledges his comedic genius.

Even as Kinison sometimes seemed a romantic at heart, his routines mostly expressed a dim view of love, possibly as a result of a string of failed relationships, but more plausibly because of the kind of women he attracted.

He was working to get himself clean and sober in the months immediately before his death and married his girlfriend Malika Souiri in 1992. But just six days after the wedding, he was killed tragically when his car was struck by a drunk driver on a two lane highway in the Mojave Desert near Needles, California.

Ironically, Kinison had often belittled the dangers of drunken driving in his comedic skits with statements like:

"It's the only way to get the goddamn car back to the house!"

He is interred at the Memorial Park Cemetery in Tulsa, Oklahoma.

Leader Of The Banned

Have You Seen Me Lately?