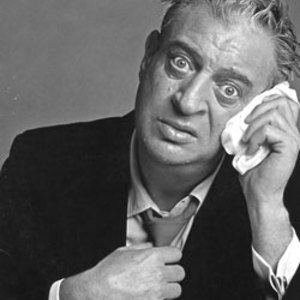 Rodney Dangerfield was born in Deer Park, New York in 1921. His birth name was Jacob Cohen. Jacob Cohen began writing jokes at the age of 15, and started performing before he was 20. He took his act to the road for ten years, his stage name was Jack Roy. While working as a struggling comedian Rodney Dangerfield worked as a singing waiter. His first run at comedy was to no avail. Rodney Dangerfield married Joyce Indig, in 1949 and had two children: Brian and Melanie. During the 1950s Rodney was an aluminum siding salesman, living in New Jersey.

The comedian made another attempt at stand up comedy, this time as Rodney Dangerfield. In 1961 Rodney divorced from his wife. When he appeared on "The Ed Sullivan Show" ("Toast of the Town" (1948)), Rodney Dangerfield made Ed Sullivan laugh. Few people ever provoked any kind of reaction out of the legendary Ed Sullivan. Dangerfield had the image of a lovable disgruntled everyman type that became a hit all across nightclubs in the 1960s. Dangerfield also made many appearances on the "The Tonight Show Starring Johnny Carson" (1962) and "The Dean Martin Show" (1965) in the 1970s. Rodney Dangerfield snatched a minor supporting part in the movie The Projectionist (1971), in 1971. By the mid 1970s he had cemented his image as a comedian constantly tugging at his red tie, always proclaiming he gets no respect. His big break came with many appearances on "Saturday Night Live" (1975), bringing himself to a much wider audience and proving hysterical on many occasions. In 1980, Dangerfield became a cornerstone of American comedy with the classic Caddyshack (1980). Here, he played Al Czervik, a rich golfer who was a basically nice guy that was extremely outspoken and very obnoxious. His character was often unhappy with the rich snobbery he was around, and he takes on the rich people that are so snobby to him. The average guy that his character portrayed was an instant hit, and a formula that Dangerfield often stuck with. Also in 1980 Rodney came out with a popular comedy album, 'Rappin Rodney'. The album earned Dangerfield a Grammy for best comedy album. The next movie on Rodney's agenda was Easy Money (1983), a comedy that showed him as an insulting working class person that suddenly becomes a millionaire. The movie was also a big hit. Dangerfield became very sparse in his roles on TV and film about this time. The year 1986 saw the comedy Back to School (1986), his biggest film to date. The comedy was one of the first to gross over 100 million. In 1994 Dangerfield starred in his first dramatic role in the successful Oliver Stone film, Natural Born Killers (1994). He played an abusive father that drove one of the killers crazy. His part was critically acclaimed. In 1995 Dangerfield entered the world of cyberspace, becoming the first entertainer to have a website on the world wide web. In 1997 he starred in Meet Wally Sparks (1997), a political and talk show satire that was poorly received. In 2000, Dangerfield starred as the Devil in Little Nicky (2000). The movie was potentially a huge hit, but was a failure by most accounts. Dangerfield took a very small part, but was top billed in the direct to video The Godson (1998), and starred in the direct to video My 5 Wives (2000). But it has not been all smooth sailing for this comedian. In 1997 he admitted to a lifelong bout with depression, and on his 80th birthday had a mild heart attack. He has major fans from all kinds of people from all different backgrounds. Dangerfield had made a record 70 appearances on the "The Tonight Show Starring Johnny Carson" (1962), and had discovered many struggling comedians, including Jerry Seinfeld, Jim Carrey, Roseanne, Robert Townsend, Sam Kinison and Tim Allen. The comedian owned a legendary nightclub in Manhattan called Dangerfield's. In the 1990s he made highly publicized appearances on "The Simpsons" (1989), "In Living Color" (1990), "Dr. Katz, Professional Therapist" (1995), "Home Improvement" (1991), "Suddenly Susan" (1996), among others. In 1993 he married Joan Child, a woman thirty years younger than him, and is a Mormon. He died on October 5, 2004 after falling into a coma following heart surgery.

What's In A Name