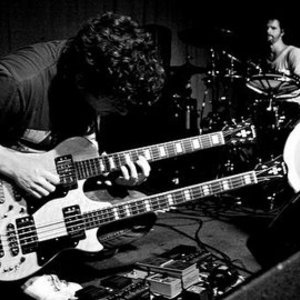 El Ten Eleven is a Los Angeles-based instrumental rock duo consisting of Kristian Dunn and Tim Fogarty. What separates El Ten Eleven from their musical peers is that they are only two musicians on stage creating pounding landscapes of sound with no laptops or sequencers. Dunn switches off (sometimes mid-song) between a double-neck bass/guitar and a fretless bass, while his feet dance on an extensive floorboard of looping devices and effects pedals. He plays everything live, loops himself and juggles all the layers of tracks on top of each other.

Fogarty switches between traditional acoustic drums, roto toms and electronic drum pads, usually within each song. To add to the insanity, Fogarty will occasionally loop himself as well.

The densely textured, atmospheric instrumental sounds of their first two full-length albums (the self-titled debut El Ten Eleven and their follow-up Every Direction Is North) have been praised alongside the work of such post-rock elite as Tortoise, Explosions in the Sky, and Sigur R?s. With their third album, These Promises Are Being Videotaped, the duo took a leap in a new musical direction more akin to the work of dance-rock envelope pushers Ratatat and Soulwax.

For their fourth full length, It's Still Like A Secret, due November 9, the duo has taken the best elements of their first three albums and combined them into something extraordinary. "On each record we learned a lot about what works and what doesn't,? Dunn explains. ?This is the perfect amalgamation of everything we do.?

Like their last few LPs, the band has opted to self-release this one on their own label, Fake Record Label, despite labels pursuing them. "I've had seven record deals, major and indie, and it never seemed to really work," reveals Dunn. "As soon as we in El Ten started doing things on our own without a label is when we found success. That's what the song, 'Ian Mackaye Was Right,' is about. Doing things yourself."

Testament to this DIY ethos is the pair's unyielding touring regime. A duo of road warriors, they have built up their fan-base the old fashioned way: by getting out on the road and playing their asses off. They have looped around America more times than they can remember and although they have yet to leave the confines of North America, their music has been heard loud and clear across the globe. ?We have so many fans from all over the world,? exclaims Fogarty. ?We get emails from Moscow, Estonia, Australia, Malaysia, Japan?it's amazing!?

This far-reaching fanaticism is likely due to the universal appeal of the music they create. After all, wordless music needs no translation. Perhaps because of this, the band's songs have been heavily used in the realms of television, film and advertising and continue to be highly sought after. Of significant note are two highly acclaimed PBS documentaries - ?Helvetica? and ?Objectified? ? both of which were nominated for Independent Spirit Awards. These films, directed and produced by Gary Hustwit, were scored by Dunn and prominently feature El Ten Eleven's music. The band has just signed on to score his third film, "Urbanized," which will be released in 2011.

?DFA 1979 and Ratatat are obvious antecedents, but these guys place a great emphasis on layering and manipulating loops on top of a consistently bodyrocking beat.? - RCRDLBL.com

"Kraftwerk in the Sky." - The Onion

These Promises Are Being Videotaped

Every Direction Is North