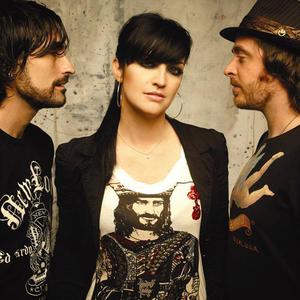 Susana Alva, G. Vial Ridgway and Raul Osuna, collected their belongings at their native Malaga and moved to Madrid to look for an opportunity. There they met Alfredo Baone, with whom they completed the formation of the band. It was five years with very little in the pocket and a lot in their hearts, doing gigs in various places while knocking at the doors of record companies with their demo. Until finally the multinational Universal saw in them the potential of the XXI century Spanish pop.

So in 2001 their first album "Efecto Mariposa" came out and made it clear who they were and what they wanted. They published three singles: "Sola" (Alone), "Inocencia" (Innocence) and "Cuerpo con cuerpo" (Body to body). Efecto Mariposa surprised everybody of us when first hearing them by their freshness, personality and above all, by their live performance, touring all over Spain leaving their name as a mark of identity. The Butterfly Effect (which is "efecto mariposa" in English) is a mathematical theory that goes about the connection between two seemingly unrelated facts and opposite consequences. It says if, for example, a butterfly flapped its wings in Japan, this could cause a large tornado at the other end of the world. Everything is connected and what is apparently a totally innocent move, can have unimaginable consequences. Something like this actually happened in Mexico. The song "Sola" was played in Mexico and caused a true tornado. The band has crossed the Atlantic three times since going to Mexico, where they managed to stay more than four months among the most played groups in radio. With their music they made more than 10,000 people in the National Auditorium in Mexico City vibrate. They closed 2002 with more than forty concerts all over Spain. In "Efecto Mariposa", their first album, they had the help of Juan Luis Jim?nez (Presuntos Implicados). In 2003 they published their second CD "Metamorfosis", produced by themselves with some help from Vicente Sabater and Juan Gonz?lez, giving the disc a new sound which was much closer to their live sound which attracted more followers every day, obtaining a spectacular effect. "Metamorfosis" contained seven new songs and a multimedia track which contains: an interview with the band, photographs, the "making of" Metamorphosis, a performance in Mexico last year and the video for "Que mas da" the first single. Metamorphosis was a lie to change the group's music became much more sugarcane than in the previous album. There were 2 singles on this record, "Que mas da" and "Say Where" In 2004 came his 4th album "Metamorphosis 2" group from Malaga, which seasoned and mature, that conveys self-confidence that have reached hundreds climbing scenarios, and that is if there's anything that Butterfly Effect stands out above the rest, is its ease and power that emerge on the stage. With "Metamorphosis 2", Susana, and Alfredo Vial make us partakers of the serenity that have achieved after so many years of struggle and effort, and reaffirm themselves through a variation of 11 topics among which includes a version, completely new issues and themes of his earlier work as the singles "Who cares" or "Tell me where" and a potent live version of his hit "Alone". He made 4 new songs for this CD World, Nobody, Si tu te vas and When 1 is 2. This CD Raul Osuna'm leaving the band's pianist. The following year came their latest CD which is the most complex of all even rock singles that have been the slower songs on the disc. This album was not with the Universal label that made them was with Tool music. They released 4 singles from this CD Another Story, I think, among flowers and Complexity. I think I get to be number 1 on the list of the top 40 chain and 100. The CD was reissued in 2006