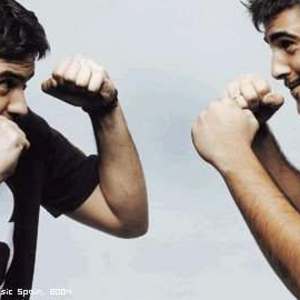 Estopa is a pop/flamenco duo founded in 1999 by brothers Jos? and David Mu?oz of Cornell? de Llobregat (Baix Llobregat), Catalonia. Their first album, Estopa, has sold well over 1,000,000 copies to date (the equivalent of an American platinum album) and their latest, Voces de Ultrarumba, sold more than 200,000 copies on its first day of release. Their playful, Rumba-tinged compositions have made them one of the most successful pop groups in Spanish history, in terms of both album sales and critical acclaim.

The name of the group, "Estopa" (tow, in english) refers to when both brothers worked together at a SEAT automobile factory and, in their own words, a boss kept on screaming at them, "?Dale estopa!" which means something like "Work hard!".