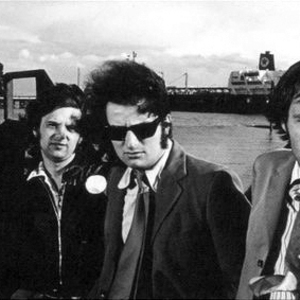 Lee Brilleaux and his friend Chris Fenwick were influenced by the American blues- and folkmusic and formed the 'Southside Jug Band' in 1967. This band later became 'The Fix' which was followed by 'The Pigboy Charlie Band', showing more of Lee's passion for Rock'n'Roll and Rhythm'n'Blues. Sparko played the guitar in that time but when Wilko from an India-trip returned to Southend in 1971 he switched to the bass to give way for Wilko's Mick Green -influenced guitar style. A clever decision.

Also Chris realized he was better in managing the band than in playing an instrument - the future showed how much he was right! Wilko was into the 60ties British Rock'n'Roll with its band Johnny Kidd and the Pirates. Him and Lee made the audiences going crazy with their unique performances. Dr Feelgood was born. The name was taken from a Pirates song. The band made a short tour through Holland and then supported the former Tornado ('Telstar') from the 60's - Heinz. Drummer Big Figure came into the band and Will Birch (Drummer of Southend band Kursaal Flyers) suggested they should try to play in London. First gig in the capital was the Tally Ho in Camden in 1973.

A Case of the Shakes