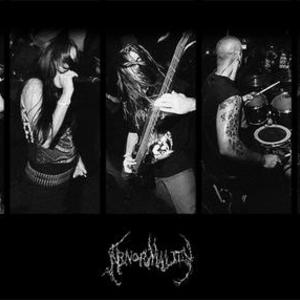 Abnormality is an extreme metal band from Massachusetts. Abnormality began in late 2005 when Mallika (vocals) joined Massachusetts death metal band Teratism on stage for a live rendition of Sepultura's ?Desperate Cry.? So impressed by Mallika's raw ability, Jay (drums) and Michael (lead guitar/vocals) of Teratism decided they could not let her talent go to waste and immediately started a side-project that quickly became their main focus. Shortly thereafter, Jeremy joined on rhythm guitar and the core lineup was complete.

In 2007 Abnormality released a 3 song demo. The song Visions was included in the video game Rock Band 2 in 2008 as a bonus song.

In 2009 Josh joined the band on bass guitar. In late 2009 Michael left the band and was replaced by Ben. They began writing for and will release a 3 song EP in 2010; The Collective Calm in Mortal Oblivion.