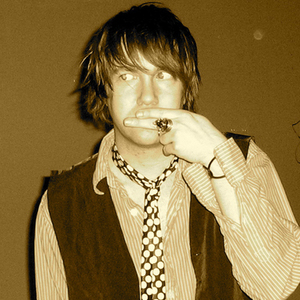 Aaron Lee Tasjan is a singer, songwriter and guitarist and producer from Brooklyn, NY. He is currently a member of the following bands: Enemies! (produced by Adam Lasus: Yo La Tengo/Clap Your Hands Say Yeah), BP Fallon & his Bandits which includes the original Blondie rhythm section consisting of drummer Clem Burke and bassist Nigel Harrison, the band Taurus and Madison Square Gardeners whom the Village Voice declared "...the best NYC has to offer."

He co-wrote the song "I Believe In Elvis Presley" with BP Fallon which was recorded and produced by Jack White for Fallon's 7" on 3rd Man Records in December of 2009. The 7" was the world's first ever "3-Sided" single. Tasjan's song "Streets Of Galilee" was recorded in 2010 by country music star Pat Green for his new album due out in 2011.

Tasjan played guitar in The New York Dolls during the spring of 2009 and completed a tour of South America with the band supporting the B-52s.

As a producer his most recent work includes "Beat By The Band" by Tim Easton & The Freelan Barons and "Sons Of The West" by Sons Of The West and "Teeth Of Champions" by Madison Square Gardeners. He is currently co-producing and playing on a record for JP Olsen (The Beetkeepers, Burn Barrel, Malefactors Of Great Wealth) with band mate Mark Stepro.

Tasjan has appeared as a guitarist and/or vocalist on the following records: "No Wonder" by Will Stratton, "Beat The Band" by Tim Easton & The Freelan Barons, "I Think I Can See The Ocean" by Elaine Lachica, "The Smile & Nod EP" by Autumn Under Echoes, "A Good Country Mile" by Kevn Kinney & The Golden Paliminos, "Taste The Thunder EP" and "Teeth Of Champions EP" by Madison Square Gardeners, "Today Is The Best Day Of My Life" by Malefactors Of Great Wealth, "Melody Kills" by Melody Kills, "Start All Over Again" by Quintus, and "Coming Home: The Songs Of Evan Phillips" by various artists.