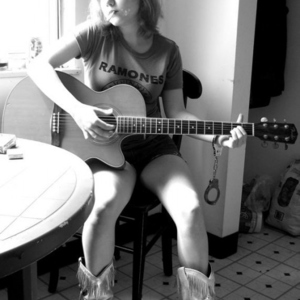 Blessed with a commanding, blast-it-to-the-back-of-the room voice, the 21-year-old Lydia Loveless was raised on a family farm in Coshocton, Ohio, US?a small weird town with nothing to do but make music. With a dad who owned a country music bar, Loveless often woke up with a house full of touring musicians scattered on couches and floors. When she got older, in the time-honored traditions of teenage rebellion, she turned her back on these roots, moved to the city (Columbus, OH) and immersed herself in the punk scene...

When she got older, in the time-honored traditions of teenage rebellion, she turned her back on these roots, moved to the city (Columbus, OH) and immersed herself in the punk scene, soaking up the musical and attitudinal influences of everyone from Charles Bukowski to Richard Hell to Hank III.

"An old soul in a 21 year-old's body, Lydia Loveless sings about the kind of heartache usually reserved for someone working on her third marriage." - The Charleston Gazette

"Manages to conjure up both Exene and Neko Case." --Washington Post

"All of 21, she's got the songwriting soul of someone twice her age and a voice to die for. Her appearance at the recent SXSW made us full-on believers." --Boudin Barndance

"Commands the stage from tune-up to the final bow, with a voice that carries to every ear, no matter how intoxicated the owner."-- The Noise

"Her name is Lydia Loveless and she is like nothing I've ever heard before. Looks a little like Pink, with just the right amount of fucked up like Shane MacGowen . . . It was one of those night where I looked around and couldn't believe there weren't more people there to witness such an amazing show." --Midwest Music

"The energy, for the listener, comes not just from what we hear now from Loveless, but also from the expectations and anticipation around what her future discontented experiences may bring to the next song we hear." --Columbus Indie

You're Leaving Me (CDS)

Live From The Documentary "Who Is Lydia Loveless​?​"

The Only Man (Explicit)