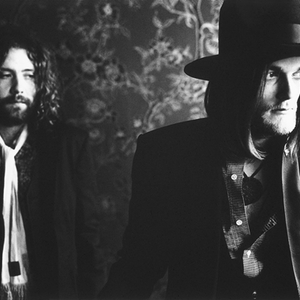 More than clever verses and catchy choruses, truly timeless albums offer listeners the keys to another world; they catapult you into another frame of mind and jostle your soul a little bit along the way. Broken Side of Time, Alberta Cross' ATO Records debut, is one of those albums. A cathartic, kaleidoscope of influences, from Depeche Mode to The Band, it's also the sound of Alberta Cross' two principals?frontman/guitarist-vocalist Petter Ericson Stakee and bassist Terry Wolfers?going for broke and stumbling across the sound of their dreams in the process.

A cathartic, kaleidoscope of influences, from Depeche Mode to The Band, it's also the sound of Alberta Cross' two principals?frontman/guitarist-vocalist Petter Ericson Stakee and bassist Terry Wolfers?going for broke and stumbling across the sound of their dreams in the process.

Broken Side of Time took root in an April 2008 jam session, Stakee and Wolfers' first with three players they would quickly enlist?guitarist Sam Kearney, drummer Austin Beede and keyboardist Alec Higgins. With the aid of a little drink and a little smoke, the five jammed on a group of Stakee's then-new songs, giving birth to Alberta Cross' second incarnation almost immediately: ?I remember thinking that night, ?This is gonna be insane,'? remembers Stakee.

It was a time of upheaval for Stakee and Wolfers, ex-pat Brits living in Brooklyn. They had moved to a new, tough city, lost the major-label record deal they had moved there with, and were in the midst of reinventing both their band and their sound, while sleeping on friends' couches. Their well-received debut EP, 2007's The Thief & the Heartbreaker, was a modest, folk-minded, acoustic-based disc that garnered glowing reviews. But, for Stakee and Wolfers, it was a baby step.

Broken Side of Time, meanwhile, is a giant stride ahead, one that marks the band's official introduction to America. Grand in volume and vast in vision, it's an inspired set of electric songs that finds the intersection of The Verve, My Morning Jacket and Neil Young (with or without Crazy Horse). Recorded in Austin, produced by the band with Mike McCarthy (Spoon, Dead Confederate, Heartless Bastards) and mixed by John O'Mahoney (Depeche Mode, Coldplay, Kasabian) at Electric Lady Studios, the album melds propulsive, throbbing bass lines and crashing waves of guitar to a haunting, impassioned voice that can sound ancient and Appalachian.

Something of an about-face from The Thief & the Heartbreaker, the album, says Stakee, bears the influence of years of frustration logged in the shadow of Manhattan: ?It's kind of a desperation album, a darker album; it's definitely angrier. We've been in a crazy place during the whole album, and you can hear that.? Appropriately, Stakee was listening to Nick Cave, Leonard Cohen, and the grimmer, gospel songs of Depeche Mode while writing the songs of Broken Side of Time. On songs like ?Rise From the Shadows? and ?Ghost of City Life? he speaks directly of their situation and surroundings.

Despite any struggles, Wolfers and Stakee in many ways have had a charmed career thus far. Born in Sweden?where he spent a childhood on tour and in studios with his musician father before moving to London in his late teens?Stakee and Wolfers?a Brit charmed by everyone from Prince and My Bloody Valentine to Metallica and Ride as a teen?were playing in a guitar-rock band in London's east end some four years ago, when Stakee brought some new songs and ideas to the band. When all were roundly rejected, Wolfers invited his bandmate to record those humble, acoustic songs on the makeshift equipment in his apartment.

?Right then and there I instantly realized that he was an extremely talented fellow,? Wolfers says. ?That's when I realized I had found someone who I could create some really great music with?after just jamming on a few things.? Those demos would become The Thief & The Heartbreaker?featuring Petter's brother, John Alexander Ericson, on keyboards?released via Fiction in the U.K. and re-released by popular demand on the bands new U.K. label, Ark Recordings.

Bored with the scene in London and in need of a burst of energy, Stakee and Wolfers moved to New York, where they immediately created a buzz, playing spellbinding acoustic shows at venues like The Living Room, en route to capturing a new deal with ATO Records. Seeking to create more of a band vibe??and we wanted it to be a family,? says Wolfers?they added Beede, Higgins and Kearney and a louder, grittier sound was born. ?We had a show at The Mercury Lounge [in New York] like two days after that first jam,? says Wolfers, ?and, without really any real time to rehearse, I remember being onstage that night thinking, ?This is the best I've heard the material.'?

Alberta Cross has toured extensively through the U.K., sharing the stage with Oasis, The Shins, Bat for Lashes and Simian Mobile Disco, among others. ?If we weren't playing for people every night, we would be going mad.? Stakee says. Adds Wolfers, ?We do it, because we have to.?

?I remember going to see The Verve on the Storm in Heaven tour, and I stood right in front of [guitarist] Nick McCabe the whole night,? the bassist continues. ?I remember walking out of that show feeling like I had just seen a group of people pour their heart and soul out, and I felt it. It changed my life. And that's what we want to do: We want to give people something honest, and move them, make them feel.?

Echoes Stakee, ?We're trying to give people truly soulful music, which is hopefully inspirational. I want to ease their minds and give them a little break from reality.?

What Are We Frightened Of?

Broken Side Of Time

The Thief & The Heartbreaker