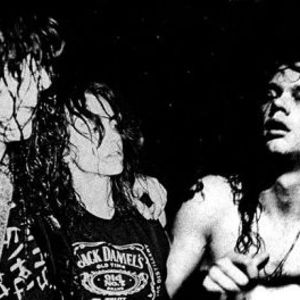 Dead Moon was a Portland, Oregon punk rock band. The band is fronted by singer-songwriter and guitarist Fred Cole; his wife Toody Cole plays bass, and Andrew Loomis plays drums. Formed in 1987, the band combined punk and country in their stripped-down sound. Fred Cole has engineered most of the band's recordings and mastered them on a mono lathe that was used for The Kingsmen's version of "Louie Louie."

Fred Cole has engineered most of the band's recordings and mastered them on a mono lathe that was used for The Kingsmen's version of "Louie Louie."
Their early records, such as In the Graveyard, were released on the Tombstone Records label, named for the musical equipment store Fred and Toody operated at the time. Soon they caught the attention of the German label Music Maniac, and toured Europe successfully. Not until the mid-nineties did they tour the United States. Much of their following is in Europe.

A U.S. filmmaking team (Kate Fix and Jason Summers) produced a 2004 documentary, Unknown Passage: The Dead Moon Story, which played in independent theaters around the U.S., New Zealand, and Melbourne International Film Fest, and might be offered with the upcoming Dead Moon box set on Sub Pop Records. Dead Moon has recorded for labels such as Empty Records, but most releases are on Music Maniac abroad and Tombstone in the U.S. The Tombstone label has also provided cheap mastering and duplication for other bands, serving more as a cooperative than a promotional vehicle.

Fred and Toody are in their sixties. They currently own the Tombstone General Store in Clackamas, Oregon, and are building a shopping center nearby.

In December 2006 they retired:

After 20 yrs, Dead Moon is retiring. It has been a journey we will always treasure and feel that a worldwide family has emerged in its place. Dead Moon became much bigger than the band itself, it became a DIY underground hopeful for a lot of people. The candle is still burning!
--Fred Cole
(from http://www.subpop.com)

2007-05-18 PIERCED ARROWS
For the first time in a long time, Fred and Toody Cole were nervous. Six months after the breakup of their legendary garage-rock outfit, Dead Moon, the Coles were about to debut a new group?something they haven't had to do for 20 years. And their new trio, Pierced Arrows, had only six practices under its belt at showtime.
http://localcut.wweek.com/2007/05/23/pierced-arrows-at-ash-street-saloon-may-18-2007/

Crack In The System

Stranded In The Mystery Zone (Reissued 2015)

Thirteen Off My Hook

Echoes Of The Past CD2

Echoes Of The Past CD1