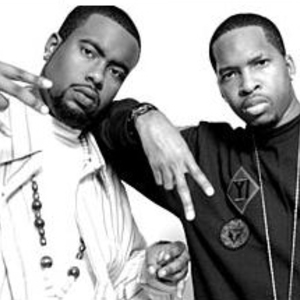 There is no doubt that hip hop has migrated south to saturate itself with Atlanta's music scene. Truth be told: the world is sittin' in the trap, crunked out on ATL. However, when you travel east of the city and journey within the gritty wooded landscape, you'll find rap duo Da Backwudz. These lyrical assassins have been grindin' for years, starting with Milwaukee Black's Major Way Entertainment where they developed their sound.

These lyrical assassins have been grindin' for years, starting with Milwaukee Black's Major Way Entertainment where they developed their sound. Then in 2004, they linked with Rowdy Records, headed by super producer Dallas Austin (Drumline, TLC, Boyz II Men). Now in 2006, Da Backwudz is emerging from the bushes with their debut album, Wood Work. With grim street narratives and soulful beats, Da Backwudz offer the best of both worlds: urban tales with a message. Who knew Decatur, Georgia was harboring talent that would change the game?
Their debut album, Wood Work, is a musical kaleidoscope representing all genres of music and yet, escapes any specific hip hop classification. This masterpiece features super production by Dallas Austin, Milwaukee Black, Rico Wade, Mr. DJ, DJ Toomp, Jasper and The Execs. Guest Appearances also include Nas, Slim Thug, Big Gipp, George Clinton, Sade, Killer Mike, Sleepy Brown, Bohagon, Caz Clay and Jeff B.

Before their debut album has even been released, Da Backwudz have already gained many accolades. They were featured as one of the five top acts of 2005 on MTV's Fab 5 of summer 2005 alongside Young Jeezy, Paul Wall, Juelz Santana and Tony Yayo. They were on the MTV Sucker Free Sunday Tour with Mike Jones, Young Jeezy, Lil Scrappy, Slim Thug, Trillville, Young Gunz and Memphis Bleek as well. MTV also featured them on their "You Hear It First" & "Discover & Download" shows. They have also been featured in such magazines as the Source, Rolling Stone, XXL, Vibe, Ozone, Billboard, Sister 2 Sister, Fader, Right On, Down, Rolling Out, Break, AUC Magazine, Atlanta Journal Constitution, Smooth, Crossover and many more. IAP-Tv.com, WordOfSouth.com, AllHipHop.com, Southwest-connect.com have also ran features on Da Backwudz. They we're apart of BET's Black College Tour in 2005, rocking crowds from coast to coast.

These poignant wordsmiths give insight to listeners about their thoughts of the world as they view it from Decatur, Georgia. Wood Work not only showcases the diversity in hip hop, it also covers the full spectrum of life- the true intent of good music. "We talk about a lot of social issues that speak to people, so we gon' bring that to the forefront. We're also a product of our environment, so we gon' try to help people too," explains Big Marc. Sho Nuff adds, "The music we makin' has so much creativity, so much life in it. We are all a part of God's environment - we put that into our music and that's what we want the word to receive." It is this very reason which makes Da Backwudz the everyday Decatur brothas, and yet, a musical phenomenon.

Although somebody put out the "Welcome to Atlanta" mat, you haven't visited ATL until you ride to Decatur and check out Da Backwudz...