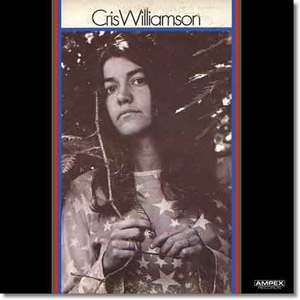 Decades before indie labels were the norm, and years before women had any real access in the industry, in her own way, Cris Williamson was busy changing the face of popular music. She hasn't looked back since. Cris's stellar vocals and compelling persona are regarded as legendary for good reason. Despite being like a well-kept secret, and dwelling almost completely in the independent music world, she nonetheless had an impact worldwide. During an interview in Washington, D.C.

Cris's stellar vocals and compelling persona are regarded as legendary for good reason. Despite being like a well-kept secret, and dwelling almost completely in the independent music world, she nonetheless had an impact worldwide. During an interview in Washington, D.C., she conceived of a national all-women's record company, which subsequently issued her now-legendary classic, The Changer and the Changed -- one of the best-selling independent releases of all time. Cris's Music was embraced and so-called by audiences hungry for fresh, bold sound able to match the uncharted waters of the mid-seventies. It took close to a decade for the genre to earn a critical reception, and by that time Cris's astounding vocals were earning reviews sounding as though they were penned by close relatives. Finally, the stage had been set for women, and
particularly for lesbians, to write, produce, record, and issue their own material -- on their own terms. Heralded by The Boston Globe as, "a brilliant lyricist and composer", Cris's music has always defied categorization. Whether it's the vibrant clarity of Blue Rider, or the live concert recording celebrating the (then) fifteenth anniversary of the anthemic Changer, Williamson continues to traverse the musical and lyrical map. A dynamic performer, she electrifies, empowers, and enlightens audiences across the generational and musical spectrum.

For nearly 30 years, Cris has toured incessantly, performing in Russia, Europe, Australia, and New Zealand. One of the most sought-after performers on the acoustic circuit, she continues to criss-cross America, selling out Carnegie Hall three times, and headlining among others, the Newport and Kerrville Folk Festivals.

For Cris, the music has always been the vehicle for something larger. Her lyrics appear on a regular basis in books and thesis papers. Her albums are part of the curriculum for women's studies courses, and thousands of people who may not even know her name join their voices in "Song of the Soul" around campfires and places of worship. She is often considered a treasure, passed hand-to-hand, person-to-person.

Says the Boston Phoenix, "Williamson is an heroic character whose tireless activism continues." Indeed. She has appeared on a multitude of benefit records including On A Winter's Night and Legacy, the late Michael Callen's final project. On behalf of Native American issues, she has helped the weavers of Big Mountain, and performed with Bonnie Raitt, Jackson Brown, Floyd Westerman and John Trudell on the Water for Life Tour.


Cris has as shared her talents with an incredibly diverse array of artists, including Bonnie Raitt, Holly Near, Vicki Randle, and Laurie Lewis. She also played a part in Kate Wolf's tribute CD. Recently, Cris has devoted a portion of her heart and time to The Songbird Foundation, sharing the stage and cause with Bonnie Raitt, Danny O'Keefe, Tom Robbins and Keb Mo.

Considered by many to be her finest work to date, Ashes, her latest CD on her own label, Wolf Moon Records, is a powerhouse collection of 12 artfully-crafted songs which read like a map of the heart's own landscape.