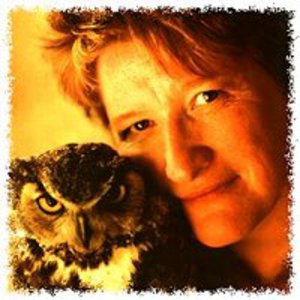 Ferron (born Debbie Foisy on June 2, 1952) is a Canadian folk singer/songwriter and poet. In addition to being one of Canada's most famous folk musicians, she is one of the most influential writers and performers of women's music, and an important influence on later musicians such as Ani DiFranco and the Indigo Girls. Ferron is featured in the documentary on women's music, Radical Harmonies 2002.

Ferron is featured in the documentary on women's music, Radical Harmonies 2002.

She learned to play guitar at age 11, and left home at 15. Ferron attended Total Ed, an alternative high school in Vancouver, graduating in 1973 (Thomas 2002). She made her professional debut in 1974, playing the song "Who Loses" at a benefit for the Women's Press Gang. She subsequently established her own record label, Lucy Records, and released her debut album in 1977. The album, Testimony, was her first professionally produced record, and brought her much interest in the United States, particularly in the women's music community.

Her 1984 album Shadows on a Dime received a four-star review (highest rating) from Rolling Stone magazine. Awarded a Canada Arts Council grant to further develop her musicianship, she took several years off from touring, returning in 1990 with Phantom Center. The album featured backing vocals by a then unheard of Tori Amos, and consequently is highly sought after by collectors. It was re-released with a duet with The Indigo Girls on the first track.

Between 1992 and 1994, Ferron released three albums on her own Cherrywood Station label. Driver was then picked up by Earthbeat! Records, and was highly acclaimed by critics as a masterwork and nominated for a Juno Award in 1995. Warner Bros. Records signed Ferron which gave her great freedom in the studio to produce Still Riot with db Benedictson. She received an Outmusic Award for Lifetime Achievement at the Gay & Lesbian American Music Awards in 1996.

As a benefit for the Institute for Musical Arts (IMA), Ferron released Inside Out (1999), covering well-known tunes from the 1950s-1970s. She published a handmade book, THe (h)UNGeR POeMs, while she was teaching classes at IMA. She gathered some of her earlier, then out-of-print recordings to create Impressionistic (2000), a retrospective double album with a 24-page, autobiographical booklet.

Ferron continues to tour and teach master classes in writing, and in 2004 she returned to the very island where some of her earliest recorded songs were written to create Turning Into Beautiful produced by db Benedictson.

Not A Still Life

Resting With The Question

Shadows On A Dime