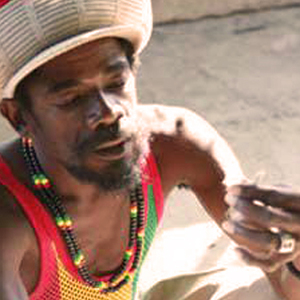 Cocoa Tea (Calvin Scott) born in Rocky Point, Clarendon was one of many vocalists who emerged from the dancehall 'explosion' of the early 80's in Jamaica. His honeyed voice brought him a healthy following with a marvellous vitality and purity of vocal tone. He has recorded with most of the top producers on the island at one time or another and his body of work includes; 'Lost Me Sonia', 'Rocking Dolly', 'Good Life', 'Heathen' and countless others worth checking out.

Cocoa Tea (born September 3, 1959 as Calvin George Scott, Jamaica) is a Jamaican reggae dancehall singer, songwriter, and DJ. He was popular in Jamaica from 1985, but has become successful worldwide only since the 1990s. One of his most famous songs is "Rikers Island", which was later put into a dub version by Nardo Ranks entitled "Me No Like Rikers Island" (featured on Dancehall Reggaespanol) which was released the same year as the original Rikers Island. He also gained fame with the song "18 and Over". He gained notoriety in March 2008 after releasing a song titled "Barack Obama" in support of the U.S. Presidential candidate by the same name.