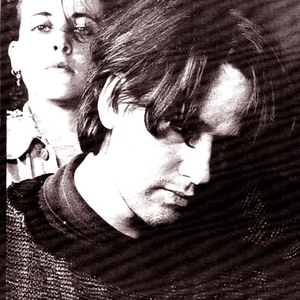 The Freeze (1976-1982) released two 7inch singles,recorded two John Peel sessions and played extensively around the UK supporting many big name bands of the time. After re-locating to London in 1982,Cindytalk began to work towards their debut album Camouflage Heart,with a newer,darker and more fractured sound that drew much from post-punk and early european industrial music.In 1983 Sharp and Clancy were joined by John Byrne who proved to be a crucial component in Cindytalk's deliberately disintegrating sound.Also in 1983 Sharp recorded a John Peel session with fellow Scots Cocteau Twins which led to a meeting with 4ad supremo Ivo Watts-Russell who invited him to appear on This Mortal Coil's 1983 debut EP "16 Days/Gathering Dust".He was also one of 3 featured singers on the debut This Mortal Coil album "It'll End In Tears" (1984), contributing vocals to Kangaroo (which was released as a single and became an instant indie hit), Fond Affections & A Single Wish. Simultaneous to that release,Camouflage Heart also appeared to some critical acclaim in the UK music press. Shortly after Camouflage Heart David Clancy left the band and was replaced by brother/sister team Alex and Debbie Wright.The collossal "In This World" was recorded over the next 3 years ... two albums of the same name released simultaneously,featuring cover art by Kathy Patterson.The first of the albums,a broken and noisy affair,the second,an album of creaky ambience featuring Sharps improvised piano experiments.In This World also featured an uncredited collaboration with feminist punk writer Kathy Acker (Janey's Love). During this period Cindytalk had begun working in tandem with performance artist and film maker Ivan Unwin,providing sound for some of his short pieces.This led Cindytalk to scoring Unwins' "Eclipse:An Amateur Enthusiasts Guide to Virus Deployment",the record of which was released on Midnight Music in 1990 under the title "The Wind Is Strong...",the album,following on from the second of the "In This World" albums,was based on piano improvisations and abstract/concrete experiments.At the time Sharp described it as "Ambi-dustrial" fusing his love of the early ambient releases on the EG label with the above-mentioned European Industrial music.Sharp was joined on this release by Ivan Unwin and long standing co-producer/engineer David Ros who became a more active member of the band at this time.Matt Kinnison and drummer/percussionist extraordinaire,Paul Middleton also provided sounds and ideas to this mix. "Secrets and Falling",a 4-track e.p. culled from the "Wappinschaw" sessions was released in 1991.At this point the band had become more of a collective,drawing on musicians from the current line-up as well as the past,John Byrne returned and was joined by Kevin Rich and Daryl Moore (Soul Static Sound).Midnight Music folded in 1992 and prevented the recently finished album "Wappinschaw" from being released until early 1995 (on Sharp's own label Touched,distributed through World Serpent).Wappinschaw Features a collaboration with Scottish artist and writer Alasdair Gray,who reads from his acclaimed novel "Lanark" (Wheesht).By 1993 Cindytalk had gone through more changes and were preparing to play live for the first time.Sharp,Middleton and Ros were joined by Paul Jones,Andie Brown,Mark Stephenson and Simon Carmichael to record and release 1994's Muster/Prince Of Lies 7inch (Touched/World Serpent).An electronic side-project,Bambule,was started in 1994 by Sharp and Carmicheal,inspired by underground techno parties such as Dead By Dawn and VFM.Carmichael left the band on the eve of Cindytalk's extensive US tour (1996) and by the time the first Bambule record was ready Carmichael had taken control of the project and it's connection to Cindytalk had receded.London's Praxis label released the 8-track vinyl double-pack (originally titled "Songs From The Motherbomb" ) as Cunning Meets Bambule (Praxis 19).Bambule followed this up in 2000 with a 4-track 12inch called "Vertical Invasion" (Praxis 29) which featured Sharp alongside new Cindytalk cohort Richie Young,Tymothi Loving and Dale Lloyd & Stuart Arentzen from Seattle band Lucid (both Sharp and Young would also collaborate with Lucid's alter-ego After The Flood on tracks for the ATF2 release).The Vertical Invasion 12inch also,included two remixes by Welsh electronic wizards Somatic Responses (as Photon Emissions). By this time Sharp had moved to the U.S. and had become involved with various techno collectives (Ele_mental in Columbus,Ohio and Candlelight in Los Angeles), whilst in LA Sharp co-founded the Darkmatter Soundsystem with dj/producers Monotek,Baseck,Diskore & others,helping to bring "extreme electronics and splintered beats" to California and beyond.Realising that his involvement in soundsystem culture took him away from Cindytalk,Sharp got down to recording new music which resulted in 2003's Klang Galerie 7" release Transgender Warrior / Guts Of London which saw Cindytalk move into even more abstract areas,taking a closer look at the rhythms,tones and melodies of noise.Sharp relocated to Japan in 2004 and has been working on various projects,including the forthcoming Cindytalk album "The Crackle Of My Soul" a work of noise-poetry which attempts to put the experiment at the centre of the idea,leaving any melodies to be found shimmering around the edges.In the Summer of 2005 Cindytalk was invited to use tracks from "The Crackle Of My Soul" as musical score for the upcoming UK independent film "Madrigal" (Rabblewise Films).

In summer 2006 and again based in London, Cindytalk started working on a new (band) album provisionally entitled "In A World Without Hope", the current line-up for this album is also in rehearsal for future live shows in and around Europe. In January 2007 Cindytalk signed a licensing deal with Italian distributors Abraxas, and through a sub-label Wheesht, will shortly be re-issuing their entire back catalogue.[This deal appears to have gone awry with Abraxas releasing the first two Cindytalk albums "Camouflage Heart" and "In This World" but not complying with the contract.Legal action is being sought by Cindytalk.] Sharps' own label touched/RAW is in the process of releasing two albums ; Cindytalk's The Crackle Of My Soul and Matt Kinnison's Evenings Of Ordinary Sand. London independent label Isolation [1] will release another Cindytalk album Up Here In The Clouds (2008). The Indiana-based label BlueSanct will soon be releasing a Cindytalk 10 inch called Silver Shoals Of Light as part of their 10 year anniversary limited edition ART SINGLES club. Sadly, Matt Kinnison died from cancer on Wednesday 7th May 2008.[1]

The Labyrinth Of The Straight Line

A Life Is Everywhere

A Question Of Re-Entry (Split With Philippe Petit)

The Poetry Of Decay CD2

The Poetry Of Decay CD1

Up Here In The Clouds

The Crackle Of My Soul