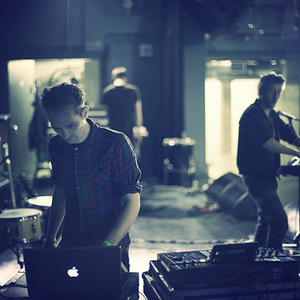 65daysofstatic began in Sheffield, United Kingdom in 2001 as Iain Armstrong, Paul Wolinski and Joe Shrewsbury. Contrary to popular belief, they did not originally form to try to write music to fit the unreleased and little known John Carpenter film, 'Stealth Bomber' (starring Kurt Russell). Instead, they took their name from the 1954 CIA-backed coup d'etat in Guatemala. There, the CIA disabled Guatemalan communication systems while spreading propaganda, leading to the overthrow of the government.

65daysofstatic (also known by the abbreviation 65dos or 65days) are an instrumental electronic and post-rock band from Sheffield, UK. Their debut album, The Fall of Math (2004), was released to critical acclaim.

Armstrong left in May 2003, Feedle (Graham Clarke) then joined for a brief period and played a part in writing the band's first single from The Fall of Math, Retreat! Retreat!. By the end of 2003 Rob Jones (drums) and Gareth Hughes (bass) had been recruited, increasing the band to four members. Gareth left around the time of the release of their debut album, The Fall of Math, to be replaced by Simon Wright.

The second album, One Time for All Time (2005), had a discrete success. In the same year they remixed Burn from the album Crimson by Alkaline Trio. The track appears on one 7inch vinyl out of a set of 2.

The third LP, The Destruction of Small Ideas (2007), was indeed a hit with fans and critics. It was anticipated by the release of its single Don't Go Down to Sorrow.

Their live album, Escape from New York, was released on 20th April 2009 and featured two new tracks: No Use Crying Over (Some Techno) and Four Score and (Some Drum 'n' Bass).

The fourth LP, We Were Exploding Anyway (2010) was released on 26th April 2010. It was anticipated by the release, in Japan only, of a single from the album entitled Weak4.

No Man's Sky- Music For An Infinite Universe CD2

No Man's Sky- Music For An Infinite Universe CD1

No Man's Sky - Music For An Infinite Universe CD2

No Man's Sky - Music For An Infinite Universe CD1