God Is An Astronaut 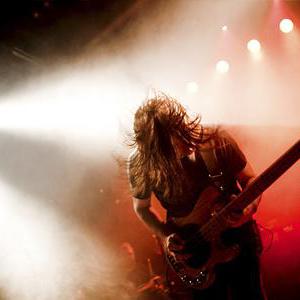 God is an Astronaut are a 4 piece who hail from Glen of the Downs, Ireland. They took their name from a line in Clive Barker's film ?Nightbreed', the band was formed by twin brothers Niels and Torsten Kinsella in 2002. After recording their first demos, and with numerous labels offering deals (yet looking for the band to add vocals to their music) they instead decided to set up their own label ?Revive Records' to release their debut album ?The End of the Beginning' in 2002. This crucially allowed the band to remain in complete creative control.

Speaking on their debut, which was originally intended as the bands farewell to the music industry, the band say ?we just wanted to finish on a release we were really proud of, we had no expectations at all.? Over the next couple of years after the album's low key release, the band started to pick up interest mainly through word of mouth on-line with rave reviews on blogs. Both video singles from the album ?The End of the Beginning? and ?From Dust to the Beyond? received airplay across Europe on MTV. This was when the world was first exposed to the bands strong usage of visuals to enhance their music.

To this point God Is An Astronaut was purely a studio project. With word spreading, the band wanted to get out and to start playing the material live and so enlisted Lloyd Hanney (who was trained by the late jazz drumming legend Johnny Wadham) to join on drums. When first out on the road their tours included visuals that were added to the live show with the purpose to enhance the emotion and structure of the songs. Initially the band picked up a wave of publicity from this, often due to the shocking images that featured on the visuals, however as their confidence grew as live performers, they put the emphasis back on their music and released their breakthrough album ?All is Violent, All is Bright? in early 2005.

In 2006 they released their first E.P. "A Moment of Stillness" (2012 version upgraded to full length album). This 5 track E.P. saw a much more ambient approach than before. In mid 2006 a licensing deal with U.K. label Rocket Girl (Vinita Joshi) saw both their E.P. and second album "All Is Violent, All Is Bright" being re-released and made available worldwide in both online stores and record stores through Pinnacle distribution (Darla USA).

"Far From Refuge" their third album was released in April 2007. This 9 track album was recorded between September 2006 - March 2007 and seen a more live band approach. An 11 track version was also released in Japan. In October that year the band embarked on their first long tour in Europe. Quickly they were considered one of the most intense live acts ever to come from Ireland due to their visual and sonic barrage.

In early 2008 they finally made it to the USA for their first tour. Although the tour was a success all their equipment was stolen after their last show in New York. But the band proved to be resilient and released their 4th "self titled" album "God Is An Astronaut" in late 2008. The album itself had a big rock production and a much heavier sound than before and was supported by a hectic touring schedule with 130 + shows in 20 different countries. Their last two European tours in 2009 completely sold out which helped further cement them as one of the big 5 post-rock instrumental bands in the world, even finishing in the top 90 worldwide bands on Last FM.

2010 seen the release of the band's 5th album ?Age Of The Fifth Sun' and the band go from a 3 piece to a 4 piece with keyboard/piano player Jamie Dean joining the band. The band received rave reviews and the best ever reactions to their concerts due to the explosive energy of the new lineup. 2012 will see the re-release of their entire back catalogue, all the albums have been re-mastered by Tim Young @ Metropolis Mastering whose credits include Massive Attack, The Beatles etc... As with all the bands music to date, they describe the record as ?a photograph or a snapshot of who we are in that moment of time?. Despite being 6 albums in, the band's outlook and ethos still remains the same as it did on their debut ? the sole priority being on releasing and performing music they love.

The Beginning Of The End (Live 20 Year Anniversary Release)

All Is Violent, All Is Bright (Live)

Age Of The Fifth Sun

God Is An Astronaut